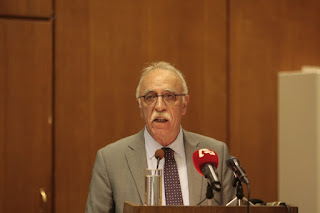 O Deputy Minister of National Defence Dimitris Vitsa in a telephone interview today.
Saturday 12 March 2016 in the MEGA and reporters I. Î§Î±ÏƒÎ±Ï€ÏŒÏ€Î¿Ï…Î»Î¿ and D. Takis, inter alia, stated:
“The sovereign rights of the country defended by the Armed Forces and are not under any dispute. Equal-equal in this space and in relation to the mission of NATO, the possibilities of the country have grown because it turns out that what we talked about, all the while, on the refugee flows were true, and so are in a better position. We strive to coordinate, and we show you all the good mood and we have the potential, so as to reduce the refugee flows from Turkey.
We, as in Smyrna, but also at the summit on 17-18 of this month, there is a decision which puts some specific data, to stop the refugee flows, or to minimize. On the other hand, the same NATO, has the ability, wishes and pushing for the greatest possible cooperation of the countries.
Here, in front of us, we have a problem, that of refugee flows. This problem must be solve. To solve needs international diplomacy, and decisions and actions. Sitting a political party, the opposition, and to do the job of a reporter, I don’t think that is good. On a free flowing condition, which changes hour by hour, trying to fix positions of hospitality, to give an international political battle, to find channels of correct agreements. On top of that starts and played a political or a partisan game. Why should I care about this?
At this time we have built in all of Greece 12 large and smaller centres, hospitality and working the other 7 centers. After the end of these 7, which will be this week that we move, we’ll work two more. This way you will overcome the 50 thousand places of hospitality in the whole of Greece from the 32 thousand that we have at the moment.
The decongestion of the Î•Î¹Î´Î¿Î¼Î­Î½Î·Ï‚ have to be by persuasion. So, what we need on a practical level, it’s more interpreters and more medical care, but first and foremost these people need to understand that they can’t, there’s no reason to stay in Eidomeni.
We chemicals and violence in children and in people who fled from the war and trying to find shelter, you are not going to use it. Only the persuasion and the need, are the ones who will lead these people. Already started from yesterday, left about 400 people from the Idomeni. This will take a most mass character. Many of them are in anticipation of the decision of the meeting on 17 March. We say that regardless of the decision, there are three camps, namely accommodation centres, very close to the area, the Land, the New Ride and Fordable. Also formed very close to the area new hospitality structure, in Giannitsa.
What I need is and the municipalities to intensify their proposals for smaller areas of hospitality that can make. At the same time to know that a part of this problem, even tomorrow, to stop, will not be resolved for a long time and I’m not talking about 2-3 months. The experience of the Athens earthquake shows that fully restored after 2 years. You will need to be activated with a faster rate in the 20 thousands longer-lasting jobs hosting. The case for the handles this time, the united nations High Commissioner quite well and is starting to pay off. A thousand such positions, from 20 thousand, were covered last week. I think this logic should work”.