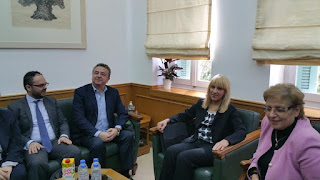 A working visit to carry out, at the headquarters of the… of the Region of Crete, in Heraklion, a delegation of the Region of Attica, headed by the Alderman, Rena Î”Î¿ÏÏÎ¿Ï…, composed of the Executive Secretary of the Region, Etc. Î Î±Ï€Î±Ï‡ÏÏ…ÏƒÎ¿Î²Î­ÏÎ³Î·Ï‚, o members of the Digital policy, Everything. Athanasiadis and the vice-president of the EU of the Î•Î”Î£ÎÎ‘, Op. ÎœÏ€Î¹Î¶Î¬.
During the first day, the focus of the visit meetings were held with the regional Governor of Crete, Stavros Arnaoutakis, as well as informative presentations concerning the promotion of tourism and the digitization of the file of the Transport Directorate of the Region of Crete. Finally, the delegation of the Region of Attica visited in the Center Ambient Intelligence at the Foundation for Research and Technology.
Specifically, the district Governor, after the meeting with the regional Governor of Crete,. Arnaoutakis, statements, stressed the existence of a “common understanding” with the regional director, highlighted, inter alia, that the visit “opens a self-explanatory, as is said, and the Governor, mr. Arnaoutakis, regional cooperation, on the basis of the exchange of expertise and good practices between the Regions on critical issues such as waste management, tourism promotion and of the digital policy”. “This is a state of the art issues, not exclusive to one or the other Region, but the entire economy as well as contribute to the development effort of the country”, stressed the same characteristics.
The Governor answering questions of journalists, emphasized, inter alia:
“What seeks the a and b degree of local self-government in our country is fundamental, institutional and legal reforms which should have happened a long time ago, because the two degrees of THE are being strangled by limitations that ultimately paid for by the local communities. With mr. Arnaoutakis we can announce that ÏƒÏ…ÏƒÏ„ÏÎ±Ï„ÎµÏ…ÏŒÎ¼Î±ÏƒÏ„Îµ concrete proposals will soon put in mind of the central government, in order, finally, the Mayors and the Prefects to serve the local communities,” observed the Governor Rena Î”Î¿ÏÏÎ¿Ï…, adding : “Even in the Congress of the Regions of the Council of Europe, I have raised the question of the existence of the Decentralized Administration, a Ï…Î²ÏÎ¹Î´Î¹Î±ÎºÏŒ institutional mechanism that controls the elected governors with the result, however, impedes the function of the elected regions. This is not a cheap ÏƒÏ…Î½Ï„ÎµÏ‡Î½Î¹Î±ÏƒÎ¼ÏŒ, but the control exercised by the Decentralized administration, leads to the strangulation of the local economy”.
In response to a question about the role of THE refugee, the Governor stated among other: “a tragic insight, a few months ago we convened a special meeting of Regional Council with the presence of Mayors, because there must be cooperation between the two levels of government as well as the minister, mr ÎœÎ¿Ï…Î¶Î¬Î»Î±. The meeting led to specific proposals, was not ÎºÎ±Ï„Î±Î³Î³ÎµÎ»Ï„Î¹ÎºÎ® or declaratory. We have said that the refugee is too important for it to play a game of shifting responsibility. In Attica, as in all of Greece, we have excellent examples of mayors making it obvious the role and importance of THE theme of the refugee. It is they who have brought the burden of dealing with the huge refugee flow even when there was neither a european nor a national plan of action. And we have to learn.
Today, the refugee is what threatens the country more than the debt crisis, and I think that we as Governors and Mayors will be there”.