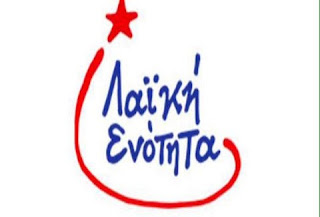 On the occasion of the adoption of the amendment of the member of the Popular Unity Nikos Chountis, with which, the European Parliament calls for the continuation of special tax arrangements for the islands (reduced VAT), the coordinating committee of Popular Unity, Rhodes calls on the Î±Ï…Ï„Î¿Î´Î¹Î¿Î¹ÎºÎ·Ï„Î¹ÎºÎ¿ÏÏ‚, trade unions, professional bodies as well as all the citizens of the Dodecanese, to make the decision of the european parliament and to pressure the government to not to apply from 1-6-16 the abolition of the reduced VAT.
The amendment (attached below) “photographing” of Greece and especially the Greek islands, stating that “in some european islands have been granted special tax arrangements” and stressing that it should “these settings continue to exist, in particular in those member states subject to economic adjustment programmes”.
Therefore, it is the fact that the government has refused to utilize even the Conditions and mechanisms of the European Union, which allow the existence of special tax arrangements for island areas, staying open in the pre-election commitments to “red lines”.
Given that the islanders have campaigned for the retention of reduced VAT rates , the vote by the european Parliament of the amendment of Nikos Chountis gives us a boost and justifies our insistence on the continuation of the claims…because there is an alternative policy.
The coordinating committee of Popular Unity Rhodes.
Amendment
Nikolaos Chountis, Sofia Sakorafa, Tania GonzÃ¡lez PeÃ±as, Miguel UrbÃ¡n Crespo, Lola SÃ¡nchez Caldentey, Xabier Benito Ziluaga, EstefanÃ­a Torres MartÃ­nez, Neoklis Sylikiotis, Takis Hadjigeorgiou
Motion for a resolution B8-0165/2016
Iskra Mihaylova
on behalf of the Committee on Regional Development
on the special situation of the islands
Motion for a resolution
Paragraph 5 a (new)
Motion for a resolution
Amendment
5a. recalls that, in accordance with the directive of the Council no. 2006/112/EC, have been granted in some european islands special tax arrangements to compensate for the permanent natural-geographic and demographic handicaps; points out the importance of such special tax arrangements for local communities and economies, and calls for these arrangements to continue to exist, in particular in those member states subject to economic adjustment programmesÂ·