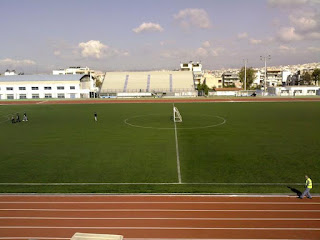 Read the announcement: “The past few days, the first Sports Center â€“ Stage of… our Municipality was an unprecedented invasion of a small group of Î¼Î±Ï…ÏÎ¿Î½Ï„Ï…Î¼Î­Î½Ï‰Î½, the aim of which was, with Ï„ÏÎ±Î¼Ï€Î¿Ï…ÎºÎ¹ÎºÎ­Ï‚ methods to prevent the administration of the Sport Organization to implement the controlled entry of people to the stage, thus satisfying a long-standing request of many years of age groups and exercisers.
It goes without saying, that applies all of the Stages, he wants to stop violent and swearing in of the mayor, a group of “children in black”, the first time set foot on the Stage.
On their side the former mayor and the lineup, where he found the opportunity to remind us again the talent of the protests and the mess, a sector that as a former administration excelled, leading the Municipality in a quagmire and disrepute.
The factors of our teams and the residents were surprised Tuesday to invade violently on the sports field and even councillors of the faction of the former mayor.
In addition to the free entry card at the site of the Stadium of the citizens and residents of our municipality, “enrage” they say the payment of 5 â‚¬ per month (as much as a cup of coffee on the seaside ) entrance for use of the space will be paid by the ÎµÏ„ÎµÏÎ¿Î´Î·Î¼ÏŒÏ„ÎµÏ‚.
The time that dozens of individuals trainers, and not only, from all over Athens using the field paid by their students, the opposition wants to subsidise substantially the municipality, paying high maintenance costs of sports facilities for the use, by the “logic” of the free and unchecked!
Like I don’t know, that our citizens if they go to the sports facilities of other municipalities, or not leave them even to get in, or pay large how much to allow them to do so . But we, as the former mayor and the Î¼Î±Ï…ÏÎ¿Ï†Î¿ÏÎµÎ¼Î­Î½Î¿Ï…Ï‚ friends, we have to accept them all and even…. free in the stages of paying and servicing our citizens .
Degrade to comment on the extremely vulgar and vile words that they wrote and told personally by the Mayor Yannis ÎšÏ‰Î½ÏƒÏ„Î±Î½Ï„Î¬Ï„Î¿Ï…, why the correct decision of the administration to get rules, we have on our side the great majority of the citizens, athletes and our teams, who finally want and on the court to get an order in the mess that we inherited from the “specialist” in the kind of Christos ÎšÎ¿ÏÏ„Î¶Î¹Î´Î·.
Already yesterday, there were vandalism in the evening hours by strangers , to the entry door and the electrical wires for the door control .
For this reason, the stage will stay today closed up to restore the damage , for security reasons .
Finally, because the “guys in black” declared implicitly….. that’s no joke, we declare publicly and clearly to the political guide : If done again, disasters in the field, in the electronic door, or if any accept verbal or other kind of attack an employee, elected the member of the administration, or any member of our families, will be personally in charge of the main ÎšÎ¿ÏÏ„Î¶Î¹Î´Î·Ï‚ and the municipal of the councillors on the Monday and Tuesday protesting on the side of the “children in black”, acting as a vanguard.
The entry card on the Field that already have made more than 250 residents and ÎµÏ„ÎµÏÎ¿Î´Î·Î¼ÏŒÏ„ÎµÏ‚ will continue normally to be the necessary condition to enter the area. So, for the safety of all, we will know, who are entering the Field, which will be open and free for all over the world to our city, through legal procedures .
As for the “kids in black” and the political Î¹Î½ÏƒÏ„ÏÎ¿ÏÎºÏ„Î¿ÏÎ±, we wish them a Good Year with less violence, threats and insults from within and outside of our sports sites…”