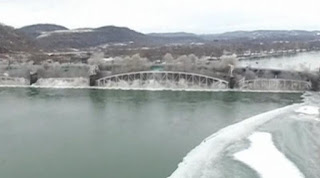 From 1908 it was constructed, and for the next 107 years, the bridge Hulton Bridge in Pittsburgh, Pennsylvania in the united states united the eastern areas of Oakmont and Harmarville. Tuesday morning at 9:50 (local time), the bridge was demolished successfully, with a controlled explosion and several of the pieces of the fallen in the nearby river Allegheny.
Bob Fescemyer, the mayor of Oakmont, attended the blasting, said: “it Was a bittersweet feeling. This bridge was a part of my life, we have a new bridge to replace the old, but could not serve the area”.