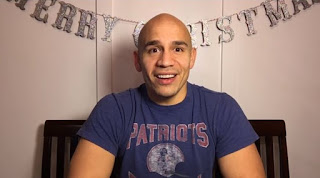 For most people, the “meeting” with cancer is undoubtedly the most unpleasant experience of their lives, that usually leads to depression and “black thoughts”. For the american marine Mark Î¦Î±ÏŠÎ»ÏŒÎ³Î± the response to the diagnosis was exactly the opposite: the “black humor”. Which decided not to keep it in a narrow family circle, but to communicate it to a wider audience. And to create a series of small video episodes, which will describe in his own way the adventures and the evolution of the disease on it.
The diagnosis was made a few days ago, and Mark immediately took the decision to proceed in this particular dealing with the problem. And in fact, without spins, and fancy, as well as, inter alia, has decided to call the series: “F— Cancer” (the first word is the well-known f-word in the English language…)
The first video of the six minutes the Î¦Î±Î¹Î»ÏŒÎ½Î³ÎºÎ± appears without any depressed mood, speaks with his wife, a sense of humor about his condition which he thinks to use it as an excuse to get an extension on the delivery deadline of a task at work, while playing Scrabble and eating cupcakes that she made at home.
“I know that to many may seem vulgar, but so am I,” says the Î¦Î±ÏŠÎ»ÏŒÎ½Î³ÎºÎ± in the video. “And will become “worse” as well as the black humor I saw that helps me in my situation, and it’s going to be even more black in the next episodes”.
The disease and the change of life for the Î¦Î±ÏŠÎ»ÏŒÎ½Î³ÎºÎ± was something extremely difficult to accept such an energetic man, who had been found in Afghanistan where, due to the love for photography had won several awards, among them recognition as the leading photographer of the Ministry of National Defense of the united states for 2009. He left the service last August, and now works in the local community as a trainer of young people in digital media.
He says that he still doesn’t know exactly what type of cancer he has, and if the Î»Î­Î¼Ï†Ï‰Î½Î± which has been diagnosed and it is now considered treatable. However, the response of the world to the first video in the series impressed him, not only with the number of people who called, but also with the Î±Î½Ï„Î¯ÏƒÏ„Î¿Ï‡ÎµÏ‚ stories I wanted to share with him. As for the same, it indicates that people don’t want to feel sorry for him, but to treat him as they treated him until today.