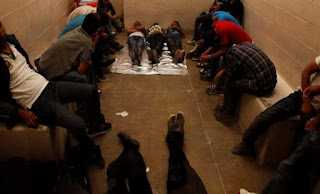 The number of immigrants is expected to arrive this year to a record high of 250 million worldwide, mainly due to the mass movement of refugees to Europe, according to estimates published yesterday by the World Bank (WB).
The migration between countries of the South represents 38% of global migration countries, exceeding the flows South-North (34%), according to the calculations of the international financial organization of Washington. These figures include all the population movements which are associated with political, cultural or economic reasons.
The immigrants were sent with remittances to their families or relatives in their countries of origin a total of 601 billion dollars, of them 441 billion in developing countries.
“Î•Î¼Î²Î¬Î¶Î¿Î½Ï„Î±Ï‚ amounts three times higher than that disbursed for development assistance at the international level, immigrants provide a lifeline to millions of households in developing countries,” explained the ÎÏ„Î¯Î»Î¹Ï€ Î¡Î¬Î¸Î±, one of the authors of the report of the WB.
The transfer of these funds is mainly from the USA (56 billion. dollars), Saudi Arabia (37 billion.) and Russia (33 billion). The countries that benefited the most is India (72 billion. dollars), China (64 billion) and the Philippines (30 billion).
“Many studies have shown that migration, whether the workers are unskilled or have a high training allows them to be substantial benefits for the host countries but also for countries of origin,” commented Sonia Plaza, one of the authors of the research.
The main countries of origin of migrants are India, Mexico, Russia, China and Bangladesh, while the countries that receive the most immigrants is the united states, Saudi Arabia, Germany, Russia and the United Arab Emirates, according to the report. France occupies seventh place in the ranking of countries that receive the most immigrants.
The most frequented migration route is that which leads from Mexico to the united states, which took the 2015 of about 13 million people. Followed by the movements from Russia to Ukraine, from Bangladesh to India, from Ukraine to Russia, according to the data of the research of the WB.
In 2014, the World Bank accounted for about 14.4 million refugees, people who fled for their lives from persecution in their home countries asking for asylum in another state. In accordance with the international financial agency, the refugees accounted for last year 6% of all immigrants. 86% of the refugees was welcomed by developing countries, such as Turkey, Pakistan and Lebanon, while the developed countries are not welcomed than 1.6 million. people.