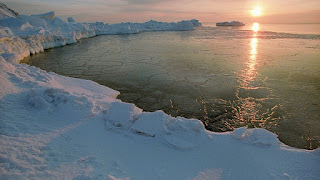 The North Pole has experienced a wave of “heat”, as well as an unusual jump in temperature has made the Arctic region is warmer…
from some of the major cities in Europe and America, according to measurements from the Environmental Observatory the North Pole.
The increase of the temperature reached in some areas up to 35 degrees Celsius above the average, and due to the same low pressure system that recently caused intense flooding in England and Scotland.
Typically, the Arctic notes temperatures up to -35 degrees Celsius in December, when there is darkness for 24 hours the 24-hour period.
Data from a buoy measurements in the Arctic reported a temperature of 0.7 degrees Celsius, but these measurements may have a large uncertainty range. The temperatures of December the North Pole has been reached or exceeded zero only three times since 1948, and never between January and March.
For example, the lowest temperature in Vienna during the same period was -1 and in Chicago -2 degrees Celsius.
Earlier this month, the average air temperature over the Arctic was recorded at 1.3 degrees above the annual average. It is the highest measurement from the 1900’s that started the comments.
The situation worsens in the event of a particularly intense phenomenon El NiÃ±o in the Pacific Ocean that disrupts the air currents and has a negative impact on weather conditions around the world. According to NASA, the satellite data show that this year’s El NiÃ±o could develop the same strong with that of 1997-1998, which was the strongest on record.
Source