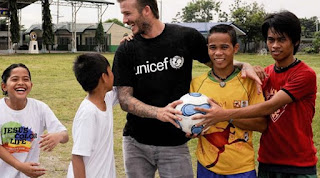 In a night full of stars and shine, but with the absence of his wife Victoria, David Beckham received the award Danny Kaye for his contribution to children all over the world as a Goodwill Ambassador of Unicef, through the charity action of “Seven”.
The 6th charity gala of the organization was in Beverly Hills and in addition to the 40-year-old former footballer was attended by a crowd of Hollywood stars including Nicole Kidman, Heidi Klum, Miranda Kerr, and Selena Gomez, while the event presented by the Mariah Carey.
Beckham with a post on Instagram, he thanked the Unicef, writing that the ceremony is “extremely honorable”.
“I look forward to continuing to do what I can for Unicef, and the Seven, to help the children of the world”, she wrote in another photo that he was with a group of children.
The award to former British soccer player turned Elton John and David Furness.