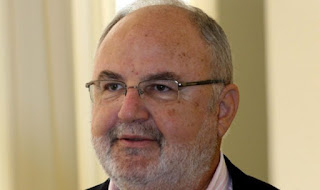 Yesterday completed 2 years of the death of the member and journalist Aris Stathakis…
He was fond of the car and one of the few who tried to change many important things in the issues of security and traffic education.
In 1992 she received the prize of Journalism for his contribution to the Greek society, on the grounds that he taught the Greeks to wear seat-belts and helmets.
He had been elected B Athens in the elections of 2004 and 2007. He had served as deputy mayor of the Municipality of Athens, president of the Organization of Road Safety of the Municipality of Athens since 2000, chairman of the municipal enterprise parking control since 2003, member of the National Committee for Road Safety since 1996, president of the Hellenic Association of Editors-a-Car, secretary-general, Association of Race car Driver Car and driver car racing. Collaborated with a variety of media, such as “Afternoon”, the magazines “Tracks and Roads”, “Auto-Express”, “4 Wheels”, “Car & Driver”, – 1, and ANT1.
Aris Stathakis has become known from the show on ANT1 “From the Driver’s seat”
See one of the last interview.