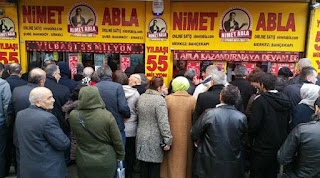 Frenzy has been created out of the agencies that sell the… new year’s lottery in every corner of Turkey, after the astronomical amount of 55 million pounds (17.300.000 euro), is a great lure for the average Turkish worker, who is paid 310 euros per month.
Although these days the weather in the neighbouring country is rainy and there are strong winds, the Turks, with umbrellas do not hesitate to stand out from the agencies to buy a lottery ticket, even if it means endless hours of waiting.
Queues outside the agency Nimet Abla in Istanbul

In the neighborhood of EminÃ¶nÃ¼ Istanbul’s residents show a clear preference to the agency “Nimet abla” (blessed sister), which is considered to be the “lucky” agency of the city. Just outside the “Nimet abla” was a traveling goodwill ambassador for goodwill’s shouting to those waiting in line: “If you’re lucky, it doesn’t matter where you buy the lottery ticket”.
The goodwill ambassador for goodwill Ahmet ÎœÎ¿Ï…Ï„Î»Î¿Ï spoke to the newspaper Hurriyet, and argued that, if one wants to win will have to wait for the right time to buy a lottery ticket and this is when the birds get sap all over! He indicated that some day a dove “, he preferred the shoulder of won the amount of 6,000 euro from a lottery ticket that he had kept for himself.
However, already 99% of new year’s eve tickets have been sold while regardless of the great lucky the Turkish government is expected to win 155 million from the sale of lottery tickets of the new year.