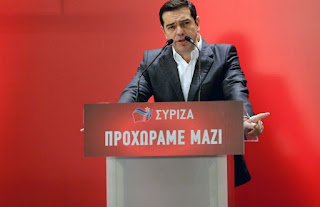 “As long as Europe remains weak-minded, weak, weak, so I strengthened the forces of euroscepticism.Our country will turn the page. The crisis is past,” said the…
prime minister Alexis Tsipras in his speech at the start of the meeting of the Central Committee of SYRIZA, which takes place today and tomorrow.
“2017 will be a time crucial for Europe,” stressed the prime minister, who underlined that “for the first time shaken the ÎµÏ…ÏÏ‰Î±Î½Ï„Î»Î±Î½Ï„Î¹ÎºÎ® relationship and the orientation of the”.
The prime minister addressed a public appeal to the Chancellor, Angela Merkel, saying: “I Want to ask the chancellor to discourage the minister of finance of the aggression against Greece and reports of the type the Greeks living beyond their means”, clarifying that “the government is not prepared to discuss requirements that are outside logic and outside the numbers”.
“From our side, we repeat with firmness, sobriety and determination: we will Not accept other games in the back of the Greek people. To know that they are playing with fire who play games for “the euro area ” two-speed” splits and divisions”, said mr. Tsipras, by Wolfgang Schaeuble.
In another part of his speech mr. Î¤ÏƒÎ¹Ï€ÏÎ±Ï‚ stressed that “Adhere to the agreed, to abide by and our partners that have been agreed. The assessment will be closed, and will close positively as if he doesnÃ¦t want to do the SOUTHWEST”.
For the IMF
“Having lost all scientific credibility from the constantly false predictions, is unable to support financially a program without brave write-down of debt”.
“And on the other hand in Europe, refuse to decide before the crucial elections, fearing the rise of the extreme right. And the IMF doesn’t have the courage of his convictions, and certain strains of it seems that they prefer to play games. He prefers to play a perpetual game of poker, ÎºÏ‰Î»Ï…ÏƒÎ¹ÎµÏÎ³ÏŽÎ½Ï„Î±Ï‚, playing the passing the buck because he doesn’t want to blame the German Minister, are trying to invent requirements unreasonable, unrealistic, fantastic enough for Greece to be charged, the reliability and the prescribed, in my view, a decision not to fund the program.”
For travel Mitsotakis in Germany
“Mr. Mitsotakis will go to Germany, I don’t know what I’ll say but I will not mention the question of extradition of mr Î§ÏÎ¹ÏƒÏ„Î¿Ï†Î¿ÏÎ¬ÎºÎ¿Ï….I came in contact with me, I requested an update. They don’t care to close the evaluation but fall to the government to come to the things To take into account who is fighting for a way out of the crisis and who gives credentials, in order to come to power. Mr. Mitsotakis and his party are the only ones in Europe that our ÎµÎ³ÎºÎ±Î»Î¿ÏÎ½ for delays. I’ll tell him that to get his power isn’t enough to ingratiate himself to the lenders but to the Greek people and that it won’t happen,” noted the prime minister.
Source