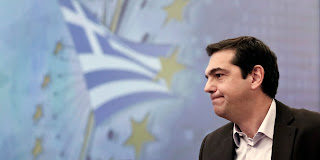 “They’re not coming other, to the parallel…
program, from here and beyond will vote” -you may be Asked for supplementary replied: “Goal is to cover all of the pension” – Featured a critical month in February
A short conversation with reporters this morning, Alexis Tsipras. Asked about the insurance said that it is necessary to reform the system, “because otherwise, in five years we will not be able to pay pensions,” as he called it. Asked if it will cut and how much the supplementary pensions replied: “Goal is to cover all the pensions”.
Also featured in February as the critical month, due to insurance, red loans and medium-term, appreciated, however, that Athens will be ready for the assessment.
Asked about the back to back Acts said they will not come other to the parallel program “from now on, we will vote”.
Finally he said that in 2015 ended with good news as “we have achieved the greatest absorbency of the NSRF”.
Earlier, Islanders, families with many children, and N. sang the carols to the prime minister.
Source