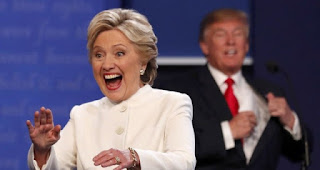 The two candidates in the final duel it was more aggressive…
Past is the third and crucial for a lot of debate between the two candidates for the presidency of the united states, Hilary Clinton, and Donald Trump was conducted at the University of Nevada, Las Vegas.
The debate began at 4 a.m. (Greek time) and the presenter was Chris Wallace, known by Fox News, who is the winner of three Emmy.
The topics discussed were the economy, immigration, the supreme justice and foreign policy.
The two candidates in the final duel was more aggressive, but following different tactics. More, of course, the Trump, which featured in the previous two debates.
The Trump featured three times on the Hillary “evil woman”, while Clinton called him a “misogynist” and a “traitor”.
The Republican candidate, threw the whole weight of the blame Hillary for anything I could think of, while more than 15 were the times he interrupted her.
Hillary on the side of trying to change the subject and goes to the debate where it was in its interest.
A special sensation was caused by the declaration of the Trump that he doesn’t know if it will accept the outcome of the election and that this will be decided at the time, adding that these elections are rigged.
The two opponents “have fought” for the issue of immigration with the Republican candidate to support the stricter control of the border by saying that the border patrol will be stronger. “I’m going to build a big wall.I’ll get rid of the drugs. The biggest problem that comes from south of our borders”, he said.
Hillary Clinton claimed that she wants secure borders and that if someone is proven to be illegal will be deported. He added that he doesn’t want to divided families and the illegal immigrants should be helped. “You don’t have to be paid less than the rest of us. We have to do something,” said mrs. Clinton.
To a question on the issue of allegations of sexual harassment of women by Donald Trump, the Republican nominee argued that everything is a lie and accused the complainants that “either they want to gain fame or are members of the campaign of Hillary”. “I didn’t do anything and that I didn’t have to ask nor apologies to my wife,” said the Trump.
In the third debate raised the issue of wikileaks and the emails of Hillary Clinton and the role played by Russia in the american elections. From the side of the candidate of the Democrats claimed that the Russians have hacked into accounts of the state and giving information to wikileaks while he argued that “should mr. Trump made it clear that it has no relations with Putin”.
The tycoon replied that it has no relations with Putin, and neither has ever met, however, made it clear that if you can work with him, I will do in order to defeat ISIS.