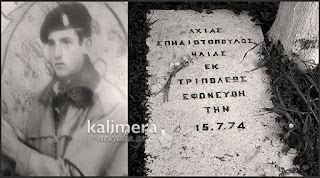 One of the fallen is Elias H. Spiliotopoulos, from Tripoli, who was murdered on 15 July 1974…
His nephew, with the same name (Ilias Spiliotopoulos), with a post on his profile, on facebook, highlights a very serious issue that has to do with the delay in repatriation of the remains, without having given an adequate explanation from the Ministry of National Defence.
Yes, notify electronically the letter and the deputy Minister of National Defence, Dimitris Vitsa.
He writes: “Here and 1.5 year we have been informed that it has become identification through DNA of the remains found in the cemetery of Nicosia.
Two weeks ago we were informed by the ministry of defence that we will be present and will receive the remains in a special ceremony which took place yesterday in Cyprus, something which annulled the ministry a few days ago saying that “your case will be settled later” without to reveal to us, nor who gave the order or who is the reason for this exclusion.
As of today all of the site he was reported as fallen in the period 63-65 period during which she was ten years old! The truth is that he was killed on 15 July 1974, and certainly not from the hand of a turk.
We demand the immediate repatriation of the remains with appropriate prices and a clear explanation for this unacceptable behavior. We demand the due respect in the family and in the 92Ï‡ÏÎ¿Î½Î· mother waiting 42 years after the remains of her child.” 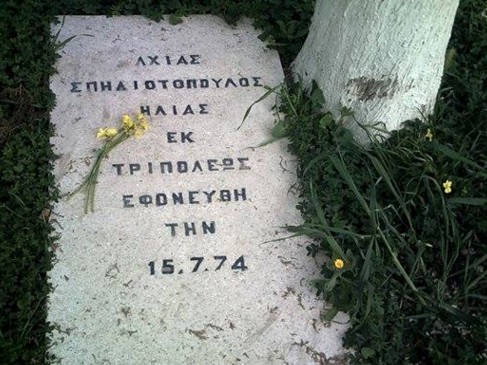 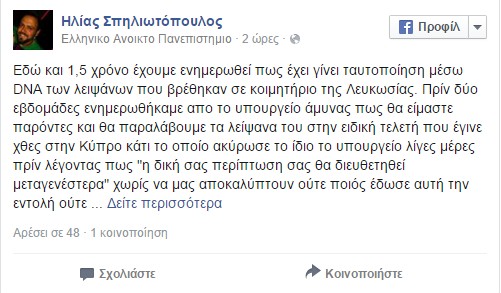