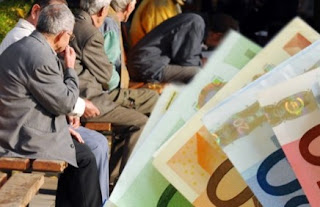 How will be the subsequent reductions in pensions to cover the hole of the insurance to you?…
The valuation only of the expenditure shall be borne by the insurance with the payment of additional amounts to the pensions, shows that the personal differences are already in the package of measures that will be required to legislate the government to close the evaluation.
The plan for pensions is hiding three bombs and includes:
1) Recalculation of old pensions with replacement rates and the addition of the National Pension law ÎšÎ±Ï„ÏÎ¿ÏÎ³ÎºÎ±Î»Î¿Ï… for all pensioners of the fund who had retired and took a pension as the 12/5/2016.
With the recalculation the amount of the pension and allowances(e.x. family, or allowance of mitigation for pensions in the Public) that exceeds the new syntax, you will get “in the box” personal dispute.
These differences are the expenditure that will be reduced according to the measures of cut for the cutter, and only if you get caught, the objectives, the cutter will be turned off. From the first costing that have been made to the competent financial services the biggest differences come out in pensions in the Public and UTILITIES sector, reaching 27%, while in the CAPACITY of personal differences is an average of 20%.
These differences are reductions in pensions, which will be done by 2018, and after, to ensure the objectives of the annual surpluses signed by the government with the lenders.
2) Removal of part of the personal differences in doses. Examined for example, to subtract 1/3 of the personal difference per year by mid-2018, or 2019 and after.
With this scenario, a retiree who is currently taking 1,350 million, and the pension with the recalculation set to 1100 euros, with a personal difference of â‚¬ 250, may be reduced by 84 euro each year for three years, in order to erase the difference of 250 euro between new and old pension by the 2018-2019 as 2021.
In case, however, that require bigger cuts, then the doses removal of the personal difference can be reduced to two instead of three.
3) Application of the index adjustment of salaries for the new permanent main pensions, which will start to award the Î•Î¦ÎšÎ‘ to those who have submitted an application from 13/5/2016 and after.
The index adjustment of wages will be out by the Statistical Authority with a special methodology. It is a new type of cutter which will automatically downloads or keeps freezing the wages of workers for the calculation of new pensions.
Provided for in the law ÎšÎ±Ï„ÏÎ¿ÏÎ³ÎºÎ±Î»Î¿Ï…(n.4387/2016) and it will work soon with the adoption of the relevant directives from the ministry of Labour. The indicator will measure the evolution of wage each year based on the average of change of earnings of workers in the economy as a whole since 2002.
So, if an employee had an increase in business by 5% in 2005 and by 4% in 2006, but in the whole economy wages had a smaller increase(say 2%), then the earnings for these years will be adjusted with the rates of the index of wages for the economy as a whole.
The final average salary will be taken into account to get the pension, they will be from the earnings that truly had the workers, but comes from the earnings that will be adjusted with the percentage wage increases in the economy as a whole.