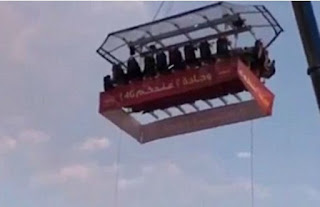 Scary video shows a pendant and a restaurant full of women to fall in the void…
The restaurant was on a crane and when the crane arrived at the end, was cut off and fell to the ground, carrying away the women who were in this to the death.
The video reportedly was taken in Bahrain, but the owner of this restaurant denies that it is from the point and claims that it’s a restaurant from Morocco.
In fact, it underlines that the restaurant complies with the safety rules, for both customers and employees.The video starts by showing the pendant in a restaurant to rising to the top, while the gathered crowd below watching.
When the restaurant reaches maximum height, they look sparks to the ropes, which finally are cut and the cage with people falling in a vacuum.