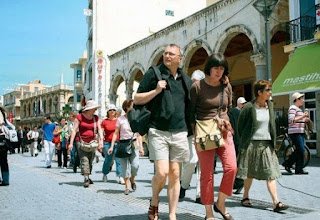 With the right in the new year for Greek tourism, as well as the provisions of the ESOS and of the Ministry.Tourism for high rise…
bookings from Britain for the new year it seems that are confirmed by the developments.
November from London and in the framework of contacts of minister of Tourism, Elena Kountoura with major tour operators in the Uk, had announced double-digit growth of Ï€ÏÎ¿ÎºÏÎ±Ï„Î®ÏƒÎµÏ‰Î½, highlighting the growing interest of the British for our country.
The messages today from the british tourism market is extremely for the new season. Greece remains high on the preference of the British for the 2017 and together with Spain, Italy and the USA (18%) are the top destinations. Noteworthy is the fact that for the first time, the Caribbean falls short of Greece in the relevant list.
Features, to January, according to the experts is the month that shows the trends will follow in the british market. It is estimated that currently 1 million British make daily reservations for your next vacation. While only the first week of the year it was estimated that over 6.5 million Brits have booked their summer holidays.
The demand, however, this year it’s increased since March, according to executives of the Ministry of Tourism, long before the period of Easter, which is forcing hoteliers to open their units much earlier, especially in popular destinations such as Crete and Rhodes. Only the British tour operator Thomas Cook is seeking extra of 30,000 seats to all Greek destinations due to the increased demand.
With a guide to the successful extension of the tourist season in 2016 and the beginning of December, 2017, action is taken by the Ministry of Tourism in coordination with the local Regions and Associations of Hoteliers, with a view to an early start this season.
As pointed out by the Ministry of Tourism, 3.6 million more jobs compared to last year are planned for the regional airports of the country, the airlines, and are expected to increase another. This number represents a growth rate of 19% compared with 2016 and is expected to be finalised towards the end of January.