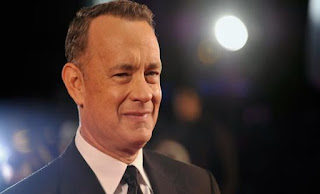 According to a new vote in the eternal “good guy” of Hollywood, it is the… number one most favorite actress of the american public, with Johnny Depp following him in second place.
The Hanks have managed to overcome in popularity, actors, first-line, such as Denzel Washington, Harrison Ford, and the last one, particularly dear in the Academy – Jennifer Lawrence.
Consistently very professional, sometimes and exciting performer(“Saving private Ryan”, “The Castaway”, “Catch me if You can”, “The Path of Loss”), you don’t need anymore to confirm the value, but still maintains a dignity in his options, since he hasn’t wasted ever the talent in something non-negotiable bad or low aesthetic.
In accordance with the vote that took place from 9 to 14 December of the previous year, and which involved 2.252 adult Americans, the most beloved movie stars of America, is the following:
1. Tom Hanks
2. Johnny Depp
3. Denzel Washington
4. John Wayne
5. Harrison Ford
6. Sandra Bullock
7. Jennifer Lawrence
8. Clint Eastwood
9. Brad Pitt
10. Julia Roberts
It is worth mentioning that the Hanks “climbed four positions, and he went up from the Thursday (which was a year ago), in the first, while the “climbing” of Johnny Depp, it was a little smaller, since he went up two positions.
Last year’s number one, i.e. Denzel Washington, dropped to third place, while the number three of 2015, Brad Pitt, “precipitated” in the ninth position of the list.
With regard to the female dynamic, neither the Roberts nor the Bullock were on the list last year, where one could see the names of Meryl Streep and Angelina Jolie to occupy the positions 7 and 10, respectively.
The bad films are back in 2015, and the two, brought as a result of their absence from this year’s top ten.
Of great interest, also, the following data about the preferences of the voters: Johnny Depp, seems to be the favorite of the women (no surprise of course), while John Wayne was chosen, primarily, from men, republicans and over 70 years of age (similarly).
One can observe a mismatch, of course, between the preferences that are manifested in the social networks (from the new generation in particular), which testifies to the list, which â€“obviously – explores a wider age range. For example, beloved, of the young film buffs, actors such as Oscar Isaac and Tom Î§Î¯Î½Ï„Î»ÎµÏƒÏ„Î¿Î½, they are not here.
On the contrary, the case of Johnny Depp that has deflated enough in the last few years (with the “Unholy Alliance” to signify an effort of the actor to return to more serious things), is the following paradox: social media the irony (for bad movies such as “Sovereignty”), but the american public keeps him in the top of preferences.