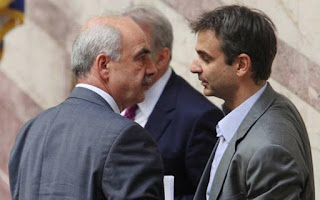 Ongoing from 07:00 in the morning, the second and decisive round of elections in the New Republic…
from whom will emerge the new president of the party and the leader of the official opposition. Vangelis Meimarakis or Kyriakos Mitsotakis on? The right to vote have the 404.000 citizens who voted and the first Sunday. Those who vote will have to come in the same polling centers for the first time. Overall, will be set 1.290 polls in 883 polling stations. Anyone who wants to vote, must have id or passport. You will get their hands on three ballots: one for Vangelis Meimarakis, one for Kyriakos Mitsotakis and a white.
This time, the voters will have to seek the voting on the basis of the initial of the adjective, while it will not pay the 3 euro participation nor will it fill in the special form. The president of the ÎšÎ•Î¦Î•, John Î¤ÏÎ±Î³Î¬ÎºÎ·Ï‚ indicates optimistic that it is possible that the final result has come out at 23:00 on Sunday night. Also, the intersection of the data will not be made only by fax but also by e-mail.
Source