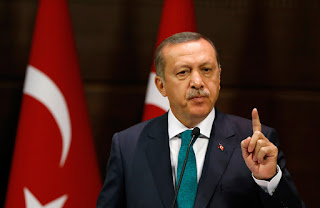 â€œGold businessâ€ with the refugees makes Erdogan…
The well-known ÎÏ„Î¬ÏŠÏƒÎµÎ¼Ï€Î»Î¿Ï…Î¼ pushing anyone and as you can in the EU to be given directly to the 3 billion in Turkey in order to…manage the issue of refugees . At the same time, Turkey will get 20 million dollars from Kuwait and there is more to come.
The electronic version of TURKIYE in the news with the title “Agreement for granting of 20 million dollars to the refugees from Syria” says that Kuwait has signed an agreement with Turkey on the basis of which is to provide financial support for the coverage of needs in health services and education of Syrian refugees. After the signing ceremony of the agreement, which took place in Ankara, the Advisor to the Turkish Prime minister, Murtaza Yeti said : “This is of course a first step. We believe that there will be a sequel. The war is in progress, and the crisis. The provision of a financial assistance from Kuwait, we consider that it is of very great importance”.
From the perspective of Kuwait, statements by the Chairman of the Development Fund, Abdulwahab A. Al Bader, who said : “we Came to Turkey for the signing of the Agreement amounting to 20 million dollars for the Syrian refugees who live here. This amount is for the support of the Syrians. Last year, during the third Session on Syria the state of Kuwait, signed an agreement which pledged to provide 500 million for Syrian refugees