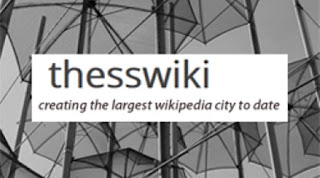 In the street of Egypt, in the Ladadika, there is today a small sign with the words “Thesswiki”, a reference to the name of Manolis Anagnostakis and the exhortation to the unsuspecting passerby or tourist to scan the bar code two-dimensional QR with the mobile phone.
He will respond to the “call” of the sign you’ll see in a few minutes to appear on the screen of the device is the following:
“In the street of Egypt – the first lane to the right –
now stands the mansion of Bank Transactions
Tourist offices and agencies for migration
And the kids can no longer run it by the so wheeled that Ï€ÎµÏÎ½Î¿ÏÎ½Îµ
After all the children were grown, the weather that passed that you knew
Now don’t laugh, don’t whisper secrets, I don’t trust
What survived of course, why did they have to heavy of sickness by then
Floods, ÎºÎ±Ï„Î±Ï€Î¿Î½Ï„Î¹ÏƒÎ¼Î¿Î¯, earthquakes, armoured soldiers
Remember the words of the father: you will meet better days
It doesn’t matter, ultimately, if not met, is the name of the class the same to their children
Always hoping that someday they’ll stop the chain
For the moment, on the old road that we used to say, rises the Bank Transactions
-I transact, you are dealing with, this deals
Tourist offices and agencies for migration
we we’re migrating, you Î¼ÎµÏ„Î±Î½Î±ÏƒÏ„ÎµÏÎµÏ„Îµ, they migrate –
Wherever I travel, Greece wounds me, said the Poet
Greece with its lovely islands, lovely offices, lovely churches”.
Today, in the street of Egypt, the remains of the palace referred to in the above excerpt from “Thessaloniki, Days of 1969 m.X.” of Manolis Anagnostakis. The relevant lemma, moreover, chosen in the framework of the initiative for students, teachers, and librarians of the Aristotle University in order to be posted on wikipedia’s tens of entries from literary works associated with specific places of historical and cultural interest of the city, where the paste their respective QR codes. The reports will be incorporated into interactive maps that will be freely accessible on the internet.
Enough farther, in the street Demetrius Î Î¿Î»Î¹Î¿ÏÎºÎ·Ï„Î¿Ï, which starts from the street Olympics, behind the administration building and climbs up to the Monastery of Vlatadon, the QR code refers to a passage of the book of Dinos Î§ÏÎ¹ÏƒÏ„Î¹Î±Î½ÏŒÏ€Î¿Ï…Î»Î¿Ï… from the book “Thessaloniki, greece th with Î¸Î­ÏƒÏ€Î¹ÏƒÎµÎ½”: “The neighborhood has a lot of color. Many poor families, with the yard still make ouzo in the afternoon, down almost to the arbor. There are also a number of like students living together with the Ï†Î¹Î»Î·Î½Î¬Î´ÎµÏ‚, some guys who get their kicks still doing wheelies with their bikes, some foreign intellectuals incurable lovers of the upper city, and several families sympathetic to Î¡Ï‰ÏƒÎ¿Ï€Î¿Î½Ï„Î¯Ï‰Î½ (other Russian-speaking and other Ï„Î¿Ï…ÏÎºÏŒÎ³Î»Ï‰ÏƒÏƒÎ¿Î¹) reminiscent of asia minor Thessaloniki, 1950”.
The posting of articles and dozens of literary extracts from the Manolis Anagnostakis, George John, Tolis Kazantzis, Life Karellis, Mary Centre – Î‘Î³Î±Î¸Î¿Ï€Î¿ÏÎ»Î¿Ï…, Cleitus Kyrou, Nikos Bakolas, Nikos Gabriel Pentzikis, Pericles Î£Ï†Ï…ÏÎ¯Î´Î· and Dino christian child, started early in the morning at the Workshop Î»Î·Î¼Î¼Î±Ï„Î¿Î³ÏÎ¬Ï†Î·ÏƒÎ·Ï‚ Wikipedia, in which participate more than a hundred students, teachers, and librarians. “In parallel with the working groups that were set up for each writer, student groups they photographed parts of the city which is associated with the literary references and placed the signs with the codes” indicates the head Address of the Central Library of the ARISTOTLE university of thessaloniki, Katerina’s nasta, which stresses that the action will be included in the 90 years of the university and will follow the translation of articles in foreign languages in order to acquaint you with the city and foreign visitors.