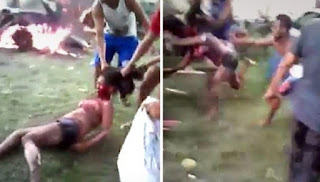 An extremely harsh incident…
took place in Brazil when an angry crowd attacked a police station where he was detained a 30-year-old, as a suspect in the death of a two-year-old child.
The 30-year-old being accused of taking that lit a fire, which led to the death of a small child. The crowd, after he beat a very wild woman, set fire to cars and threw it on the flaming vehicles.
The woman managed to escape from the flames with burns all over her body.