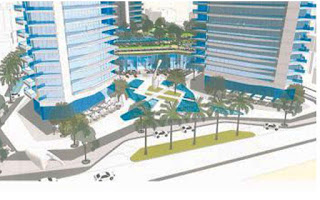 Large-scale development that includes shops, offices, apartments, spa & gym for residents, three swimming pools and places …
parking is Street Î‘Î¼Î±Î¸Î¿ÏÎ½Ï„Î¿Ï‚ in Limassol. It is three multi-story apartment buildings at the beach front of Limassol with the height of the building reaches 160 meters.
Specifically, it consists of three towers of 37 floors with 297 apartments, 10,000 sq.with offices, 1800 sq. m of shops and 1508 underground and aboveground parking spaces. The total area of the development is 58.500 sq.m. The large-scale joint development belongs to the group Lanitis. The estimated cost of the project is estimated at â‚¬150 million. The start of work is planned for next January 2017 and the construction works will be completed in seven years. The development of the project will be done in three phases with the Third phase expected to be completed by the end of 2023.
The Limassol Municipality, as a planning Authority, testified on behalf of the Group preliminary report of impacts on environment from the construction of the development which will be examined on 1 November 2016.
The proposed project “Lanitis Seafront”, concerns the construction of three towers (two identical towers in the southern part of the area of development and one in the north), with private outdoor space, public square and parking areas (public and private). The east and west tower, which will be located in the southern part of the site development of the project will have a height 156.3 m and 161 m, respectively, while the north tower will have a height of 137.6 m.
The objective of the company is the upgrade of the Road Î‘Î¼Î±Î¸Î¿ÏÎ½Ï„Î¿Ï‚, the coastal road of Limassol with the enrichment of the area with high-quality modern residential, office and other uses that will contribute to the upgrading of the area.
During the three construction phases for the proposed project, are expected to find employment for a total of approximately 1,000 people. During the construction work, it is estimated that the site will not employed more than 400 people a day.
During the operation of the site, liquid waste is possible to produce extra fuel from any leaks, from the disposal of oils from the machinery, as well as from washings due to the soaking pile of materials in the field of work.
Report impact on the environment
In the preliminary report environmental impact assessment recorded a number of effects on the environment and public health of the population of the area, both during the construction stage, and operation of the project.
In particular, the most significant effects on the environment of the area will occur during the construction phase of the proposed project, including the production of dust from the construction work. The largest quantities of dust expected to be produced during the movement of construction machinery and the dumping / posting of materials to and from piles. The percentage of the dust can be greatly reduced with simple methods of management during construction and control measures at the source.
Another important impact will be the emitted noise from the construction machinery and vehicles during the construction works. As stated in the study, the hours of operation of the site will be adjusted to the normal working hours of the workers and should, therefore, respect the hours of quiet. The study is characterized as a temporary impact of noise that will occur during construction of the proposed project.
The effects of the liquid waste during the construction phase of the proposed project is not expected to be significant under the condition of rational management on the construction site. With regard to the solid waste produced during construction of the proposed project, the person in charge of the site will take care of the placement of building materials in the appropriate places, the accumulation and removal of solid waste and surplus materials, as well as for cleaning the site of work after completion of construction work. Also, the contractor of the project should ensure in a timely manner the relevant permits for disposal of construction waste at approved sites.

Increase in traffic from operation of the project
During the operational phase of the proposed project, are not expected to result in significant effects on the environment of the area. The effects of increased traffic caused by the operation of the proposed project, it is estimated that it is not going to significantly affect the traffic capacity of adjacent roads, although this is a significant increase in traffic, as the road network in the region will have the ability to absorb the forecast traffic that will occur.
Source