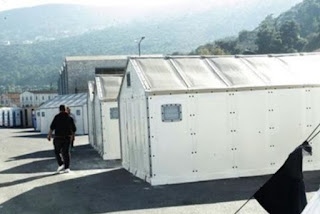 What provides the new institutional framework for land use…
The centers for immigrants are an integral part of our lives due to the refugee crisis but also of urban vegetable gardens for household consumption, establishes for the first time, the ministry of the Environment, defining what is allowed in each area.
The new institutional framework, comes to modernize the land uses that were established 30 years ago and in which fatal had fled the government with the removal of the corresponding chapter, which was established in the previous Parliament to the law on spatial and urban planning reform. Yesterday, the RIS with a delay of several months, he gave it to consultation until 13 March, the new framework that responds to the needs and conditions of the new era, by eliminating the wide open windows of the previous law (4269/2014) with the settings of the charged areas pure and general housing with a variety of commercial and other uses.
In the category of a pure housing belong to the so-called urban centers of the city like Elmwood, the New Psychic etc where, until now, very few uses are allowed. With the new framework, enacted in the areas of Exclusive Housing, which is permitted limited activities such as social welfare, education, outdoor sports facilities, religious places, municipal markets, corners recycling, mobile phone antennas. Respectively in the solid areas of residence added new land uses such as corners recycling and urban agriculture (kitchen gardens). In these areas, shops are at the level of the neighbourhood to serve the daily needs of citizens.
The ministry retains the forecast of the previous arrangement (as former minister Nikos Tagaras) for areas-receptors of productive activities (Technological Park), and introduces new such as Agricultural Use for the protection of rural land and Areas of Protection of natural and environmental wealth. This is a category that is subject to the same legal status as forests, wooded areas, archaeological areas, seashore, etc.
According to the ministry, “every one of the general categories include specific permitted special uses, which have been enriched in order to capture the range of changes in the modern way of life, and the socio-economic activities, the urban and ÎµÎ¾Ï‰Î±ÏƒÏ„Î¹ÎºÏŒÏ‚ area are invited to meet”.
Among the specific new uses introduced by the draft Presidential Decree included: 1) the green points and the corners recycling are key tools for the implementation of the National Plan for Waste Management, 2) urban agriculture â€“ kitchen gardens which allow for the cultivation in the cities of agricultural products for personal consumption, 3) the facilities for the reception and hospitality of migrants/ refugees as the necessary structures for the management of the refugee crisis, 4) the farms as the basic production activity in the countryside”.