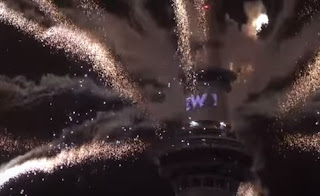 See below…To 2016 in New Zealand it is a fact. In Oakland, thousands of new zealanders welcomed the new year, in the first change of time on the planet.
New Zealand is every year the first country that welcomes the new year in Auckland welcomed in 2016 with a lot of impressive fireworks.
With the temperature at 20 degrees Celsius and thousands of new zealanders in the centre of Auckland, the night became day, leaving behind in 2015.