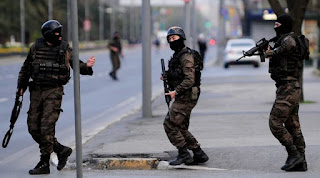 Professor Constantinos Filis, director of Research at the Institute of International Relations, stresses that…
if the connection is confirmed with terrorism “there will be consequences and yes, in many directions”
The assessment that if it is confirmed that the current bloody explosion in Istanbul is a terrorist attack “is more likely to be the Islamic State back from this” delivered by professor Constantinos Filis, director of Research at the Institute of International Relations, speaking on the “Agency 104,9 FM” and the tv show “Two at 12” with the Fanny Grigoriadis.
In fact, he noted that if the connection is confirmed with terrorism “there will be consequences and yes, in many directions” and added that today’s event, “an attack -apparently – the kamikaze against non-Turkish citizens […] sends a message in many directions” as if they are European citizens is a problem for Europe itself, but also a matter of security for Turkey itself.
Specifically, when asked about who could be behind the attack, mr Friend stressed that we need to be very careful as it is the first few hours after the strike, he replied: “We can trace our attention in two directions. The first is the Islamic State, the second to the Kurds, who are an important part of South-eastern Turkey, almost under siege in the last period; the Turkish forces launch continuous attacks, have imposed almost martial law in some areas of these and it is a very, very difficult situation”.
Appreciated, however, that most likely is the version of the Islamic State, as well as the Kurds, as underlined, “do not choose this kind of hits because they fight anyway against the Turkish soldiers” and “I don’t have any reason to turn against Europe or the country whose citizens -say, for Germans the first information – are among the victims. “It’s not generally something which tend to make the Kurdish fighters. We end up in the Islamic State,” he noted.
In terms of incentives from the side of the ISIS for such an action, mr. Friend pointed out: “we don’t know today, because of the security measures that have been taken in Europe, if it would be easy to get a hit in the ‘heart’ of Europe, such as the one we had about two months ago in Paris. Also, the terrorists are moving with a reasonable flap, which can have a wider impact. Hitting in the heart of Istanbul, a large multicultural city, which is essentially the european capital of Turkey, Europeans-apparently – citizens, is a stunning blow”.
He mentioned that “may be a hit who wants to export, to externalize the problems facing the Islamic State from the attacks in Syria and Iraq, and to transfer the centre of gravity of public opinion to somewhere else and not to the losses of the ground in the Middle East”.
Mr Friend considered that the current incident requires and Turkey may reconsider its own stance with regard to the Islamic State. “Can the terrorists chose a target that is more easy compared to some of the others -without saying that Istanbul is an easy task, but it can be easiest in comparison with other european capitals – to send a message to Turkey that it must stop to facilitate westerners and must cease the targeting of the Islamic State, the forced targeting, because until recently, it seems that there was an unholy alliance between, but this no longer under the pressure of conditions no longer exists”.
Rated that with the negative impact that would logically be in tourism, will increase and the pressure on Turkish president Recep Tayyip Erdogan, that “sooner or later will ask why the country is so vulnerable to become so many attacks in so little time”.
Source