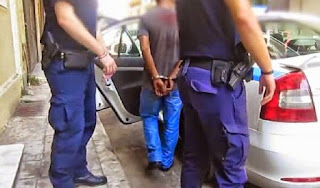 The 34-year-old gypsy, with the nickname “Î Î¬ÏƒÏƒÎ±ÏÎ·Ï‚”, was arrested…
the officers of the Division for Security Tower, against whom there were warrants of the investigating judge of Ilia, for theft by aiding and abetting as well as for marketing minors in aiding and abetting.
The 34-year-old, was arrested yesterday by the police and already led to the Prosecution Authorities, while a few days earlier, had been arrested even a 33-year-old gypsy, with a charge of child trafficking.
The case, which is now completed by the police, with the arrest of 34 year old, related to the marketing of minor children, where the two gunmen on 2 June they moved their children to the port of Katakolon and forced to beg, asking for money from tourists who came by cruise ship.
The perpetrators, however, aware of the intense police presence in the area left of the point in the direction of the Tower and abandoned the minor children.
In the meantime, the evening of the same day have been identified by police Subdivision Security Tower and arrested the 33-year-old, while the 34-year-old, then fled.
From the police investigation it emerged that the two perpetrators acting jointly, during the month of May until the 2nd of June, where he was the capture of the 33Ï‡ÏÎ¿Î½Î·Ï‚ accomplice, carried out systematically, in a car the two minor children, aged 13, at the port of Katakolon, on the dates of arrivals of cruise ships and forced to beg. Once they were done the begging children, the two suspects removed all the money collected, which in some cases exceeded the amount of two hundred 200 euro.
It is worth noting that the 34-year-old, allegedly involved in a case of theft that had happened at the same time in a known mill of Samiko, while he was quite well known to the Police Authorities for action.
Source