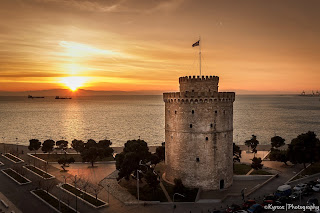 A list of 52 places to visit this year…
it hosts the american journal on pages of the
If the article of the newspaper the New York Times could… sing then you would choose the “Thessaloniki my great Ï†Ï„Ï‰Ï‡Î¿Î¼Î¬Î½Î±, you take the best guys” and would add the “better food” in the verse.
The flagship newspaper drew up a list of the 52 places that should be visited in 2016, putting in the first place, number 1, Mexico city. Was preceded by a brainstorming session where a great group of associates, journalists filed its views on them-in their opinion – exciting travel destinations in the new year.
The restless traveler and avid traveler is required to choose, now, through a long list of places and cities which are combined with the appropriate GIF image.
“The second largest city of Greece is first in the food” is the subtitle of the new york Times that portrays the Thessaloniki over-the-top gastronomic destination. Thessaloniki is located in the number 47, between the St. Louis, Missouri (46), and in ÎœÎ¬ÏÏ†Î± Texas (48), with the nearest culinary rival Cesme of neighbouring Turkey which is located in number 14.
The young professionals of Thessaloniki, with plenty of Ï†Î¿Î¹Ï„Î·Ï„ÏŒÎºÎ¿ÏƒÎ¼Î¿, experienced high unemployment in an unusual way, writes the newspaper. They opened restaurants, mixed spices and mixed up “the traditional Greek cuisine with slavic and ottoman perfumes” keeping high quality of raw materials and low prices. Among these restaurants the authors singled out the local cuisine of the Sebrico (www.facebook.com/pages/Î£Î­Î¼Ï€ÏÎ¹ÎºÎ¿/584403224932874), the vegetarian Roots (/www.facebook.com/rOOTS-1512775345602506/) and the Estrellla (http://bougatsan.tumblr.com/) with the inventive “Î¼Ï€Î¿Ï…Î³Î±Ï„ÏƒÎ¬Î½” and this year’s sweet “1975: Î•Ï…Ï„Ï…Ï‡ÎµÎ¯Ï„Îµ!”. 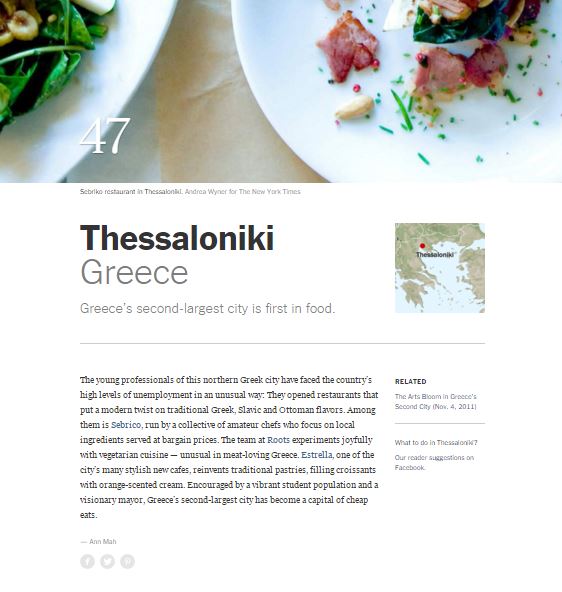