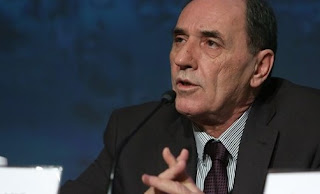 The key points of the new development law were presented Wednesday to the Commission for Monitoring and Control of the Government Project… for the Development by the minister of Economy, Development and Tourism, George Stathakis, and the general secretary of Private Investment, Lois Î›Î±Î¼Ï€ÏÎ¹Î±Î½Î¯Î´Î·.
Starting the minister mentioned as the central idea of the government initiatives to mobilise all of the tools, so that there is, as far as possible, most outward-looking, investment activity”. In this direction, the most important tools that there is the national strategic reference framework, the new development law, as well as a range of financial tools, which either pre-existed or have emerged, (such as the Juncker Plan). For the last pointed out the usefulness of a development agency, it helps to have access to these tools, small and medium-sized enterprises.
Mr. Stathakis described the two important stations in the next period: the establishment of The Development Council, which will act co-ordinating and advisory in cooperation with other actors and the presentation of the development plan in the early spring. As he said, we should also proceed with institutional changes, in cooperation with international Organisations, such as the OECD, with its core objective the strengthening of competition, the elimination of bureaucracy and the creation of a friendlier environment for the healthy entrepreneurship. Particular emphasis is given on new initiatives to strengthen transparency in the public and the private sector. Announced that it will soon filed a bill on public procurement, which will be a substantial incision, ensuring transparency and enhancing competition in the market.
The key points of the new development law
Then, mr. Î›Î±Î¼Ï€ÏÎ¹Î±Î½Î¯Î´Î·Ï‚ presented the key points of the new development law, which aim to attract capital, in order to recover lost ground and return to the fixed private capital in the economy at the levels of 2010. It is estimated that for this purpose will require investment of eur 70 billion. euro. The secretary-general criticised the previous development laws, which, as he said, achieved extremely limited results, while still “dodging” the budget with debts of at least 2 billion. euro, to be covered over the next three years.
The new law will have as main objectives:
The growth of employment, primarily of skilled human resources
The strengthening of innovation and extroversion
The re-industrialisation
Halting the wave of exodus of young scientists from the country
The increase of the domestic value-added
The stimulation of healthy and well-targeted entrepreneurship
The development of clusters of similar businesses (cluster) and projects co-operative, social and solidarity economy
Mainly, though, according to mr Î›Î±Î¼Ï€ÏÎ¹Î±Î½Î¯Î´Î·, the new Investment Law will provide the opportunity to establish a new identity for the country (branding), with a focus on the sectors of technology-information technology-communications and the agri-food chain.
On the innovations of the new law, that gives priority to increasing employment, in particular, of skilled people, to increase the innovative character and extroversion of enterprises, the ability of business support “in a restructuring phase”, as well as strengthening of intangible costs. The subsidies will be limited. The aid will primarily concern tax exemptions, Ï…Ï€ÎµÏÎ±Ï€Î¿ÏƒÎ²Î­ÏƒÎµÎ¹Ï‚, loan guarantees, capital holdings, etc., while important will be the role of the design of new financial tools. Substantial changes will take place and the evaluation criteria, with priority given to businesses that contribute to the achievement of the vision and strategies of the law.