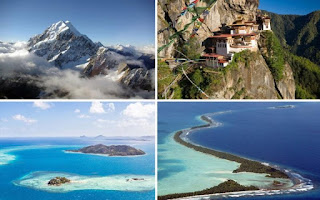 On the occasion of the series of terrorist attacks and conflicts that are happening… all over the world the british Sun, it shall publish the list of the 10 most safe countries in the world.
Switzerland
Switzerland is located in the tenth position having a history of a neutral, broad warehouses and well-equipped army, making it in conjunction with the geography of a safe haven, according to research.
Tuvalu, Pacific Ocean
A remote island that is located deep in the Pacific Ocean, the extreme isolated Tuvalu is politically neutral, has a small population and limited resources. However, it is self-sufficient and the residents are surviving on their own products.
New Zealand
New Zealand is an isolated, developed country with a stable democracy. Also, it has managed to stay out of many conflicts, and has several mountain places that can serve as a refuge in a war, according to the newspaper.
Bhutan
Hidden in the mountains of the Himalayas, Bhutan offers protection and isolation from any potential threats. Since joining the United Nations in 1971, Bhutan has remained politically neutral and does not have diplomatic relations with the United States.
Chile
It is considered as one of the most stable and prosperous nations of South America. Chile is a safe country to find refuge, according to the british Sun.
Iceland
Iceland is a quiet and remote island which does not share borders with any other country. Ranked in first place in the Global Peace Index, 2015. In addition, the mountainous terrain of Iceland provides protection in a potential war.
Greenland
Greenland is considered the 4th safest country to live in, while in the plus include the geographical position and the fact that it is politically neutral.
Malta
Over the years many have tried unsuccessfully to occupy Malta, the small island in the Mediterranean Sea. Malta is in the third position of the most safe countries in the world.
Ireland
Ireland is a stable and economically developed country, without political ties and has historically been a stable path to independence. According to irish law, may not participate in any external war, without permission from the UN.
Island Fiji
In place number one, according to the british Sun is the island of Fiji. A small isolated island, with a neutral position in terms of foreign policy, that does not justify conflicts.