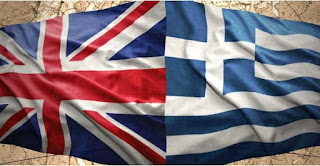 Over 1.2 billion. sterling is the value of trade of Greece with Great Britain and the question that burns is how you formatted the next day after the Brexit…
By referring to the data of bilateral trade finds that the United Kingdom can be characterized as one of the main customers of Greek exporting firms. In particular, the United Kingdom occupies the 6th place among the trade partners of Greece, while our country occupies the 43rd place between the customer and 56th among the suppliers in the United Kingdom.
Based on the latest available data, the volume of bilateral trade between Greece and the United Kingdom amounted, for the first 9 months 2015, the amount of 1,17 billion. pounds, compared with 1.25 billion. in the corresponding period of 2014, a reduction of 6.36%. More specifically, the value of Greek exports in The.B. was 522,20 ec. pounds compared 520,93 ec. of the corresponding period of the previous year, marking a marginal increase of 0,24%.
The value of Greek imports from The.B. amounted to 649,43 ec. pounds compared 730,31 ec. 2014, decreasing by 11,07%.
Exports
The 10 main categories exported in The.B. products are:
Medicinal,
Electrical machinery and equipment,
milk and products dairy,
Preparations of vegetables, fruit,
Copper and articles of copper,
Aluminum and products thereof,
Fruit, nuts,
Garments and clothing accessories,
Plastics and plastic products
Salt, sulphur-gypsum and cement
Imports
The 10 main categories of imported from The.B. products are:
Medicinal,
Motor vehicles and tractors,
Electrical machinery and equipment,
Nuclear reactors,
Aircraft / Spacecraft,
Drinks, alcoholic beverages and vinegar,
Various products of chemical industries,
Garments, other than knitted or crocheted,
Garments, knitted or crocheted and. Books
Products publishing houses
How many Greeks work in the Uk. Kingdom
Interest, and the evidence for the Greeks who are working in the “island”. According to data from the british Department of Work and Pensions, the number of Greeks who have obtained a Social Security Number (National Insurance Number, NIN) has increased significantly in recent years. The Social Security Number is necessary for entry into the labour market of the United Kingdom and is the safest indicator for the number of Greeks travelling to the Uk for employment.
In particular, the period of 2010 â€“ first Half of 2015, the number of Greeks who acquired NIN was on 41.098 people. In the years 2002-2010, the annual number of Greeks who acquired NIN was around 3,000 persons, while now the number has tripled, rising to 10,000 people for approximately per year.
The vast majority of registered (about 90% of the total) belongs to the wider age group of 18-44 years, while a significant rise presents and the age group 45-54 years. With regard to the areas where registered, London to 44% of total records (data as of 2014), followed by the area of the south-East of England (12%) and Scotland (9,5%).
George’s Grandfather
Source