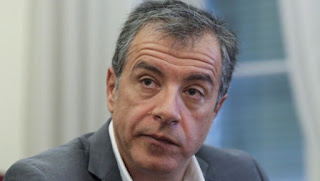 “We have to try…
to find a solution, if we don’t get to go to the Hague”, said the head of the River, Stavros Theodorakis, speaking in an interview for the Greek-Turkish relations.
Mr Theodorakis, speaking at the militaire.gr, made specific proposals incisions for the operation of the Armed Î”Ï…Î½Î¬Î¼ÎµÏ‰, where among other things, proposed:
The creation of smaller and more flexible military units
The reduction in the number of officers with a parallel increase of their wages
The reduction of the camps and at the same time the improvement of the infrastructure of the other
The participation of the Parliament in the selection of the heads of the Armed Forces
And reiterated the proposal of the Movement for the creation of a National Security Council with the participation of the political and military leadership
In terms of Greek-Turkish relations, Stavros Theodorakis said that “we have to try to find a solution, if we don’t get to go to the Hague”. And he stressed: “Greece must move forward. We cannot tolerate constantly challenge me, in the islands, the sea, in the territories. What do you do then? You’re strong, you’ve got your troops, you have a consistent foreign policy, but when I question the things that you have consolidated and with international conventions, like: Go to the international courts. Greece the major issues will be vindicated”.
For the selection of the heads of the Armed Forces, he said: “I don’t care who is the minister of Defence today, although I have many doubts about the good sense of mr. Kammenos, but whoever is the secretary of Defense should have been given the right to Parliament to have a say in the selection of the leadership of the troop. I will do a raffle between the parties, but can’t the physical leadership of the army to be cut off from the political leadership of the country”.
As for the issue of the establishment of a National Security Council, the head of the River, stressed that “will take part the prime minister, the ministers of Defense and Foreign affairs, the heads of the parties and the physical leadership of the army, and discuss crises, either in Defence or in foreign policy”. “The SW, as said, is positive, the PASOK is positive. Usually the opposition is always positive, when is it that someone in government, do the same with the previous one. SYRIZA, so while he said that there should be a National Security Council, now that it’s government can be arranged to take the decisions alone. And this is wrong. And don’t combine with persons. In matters of national policy, on issues of Defense, can not, a person is a party to expresses the country. Need for greater involvement, greater responsibility”.
In an interview, Stavros Theodorakis praised the officers and as he said “we have to be very happy with the performance and the behavior of the troops at this time”. “Do you feel that the officers have managed to keep the army up in spite of the economic and social crisis. And this should be credited. I go to camps, not always with photographers, I have been impressed by people who are educated, have modern views and don’t get the policies of the estimates with the work that they do. This is great”. At another point when asked about his visits to the border, he said: “I Went to the bridge. I was impressed by the officers, the soldiers, who are there day in, day out and at the same time I was embarrassed when they told me what they are getting, and infrastructure”.