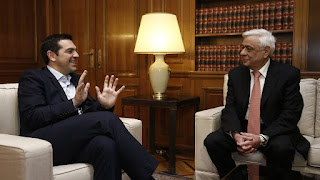 The optimism for the new year that showed the President of the Republic Agent. Pavlopoulos in the established ceremony of the new year’s wishes from the…
political, religious and military leadership, it seemed from the beginning when the prime minister Al. Tsipras went first of all to wish.
Instead of another wish, or at least prompt the President of the Republic said to the prime minister: “Of time and with a tie, because next year we’ll be out of the memorandum”. The truth is that mr Tsipras was taken aback and the only thing he said was:”you Put the bar high”.
Then, in one short conversation (off camera) that he had with journalists, the optimism of the President of the Republic for the new year, continued: “The elections showed that the people want Greece in Europe. Unity of political forces doesn’t mean prompt for a co-presidency, but agreement on the big issues of the nation,” he said. And of course, there was question if he means the consent or even the consultation and in the passage of two crucial bills, namely the insurance and the farmers and mr. Pavlopoulos replied: “I am Not talking about bills, but if something is important there, concerning the run of the place, then see what we can do to show that we are all together”. And he brought as example, of the 220 votes that received the agreement of the House: “you don’t know what impact had it on the outside”, he said.
However, the President of the Republic has shown its intention to intervene to ensure stability in the country: “If you need my intervention to be sure that there will be, in the context of the powers provided for in the Constitution” And pointed out that “the regulatory role of the President of the Republic does not have a fixed content, it changes with the criticality of the times. In the critical periods of the content changes, don’t apply regulatory powers”, he said. And when again asked to be able to be arranged for the insurance, as and for the refugee replied: “if they want to….. I’m here for you”. Excluded, however, the convergence of the same of the Council’s Political Leaders, saying that it is a question of the Prime minister. The convergence, said a Council of Political Leaders requires the explicit desire of the leaders that they want a meeting and have agreed on the agenda, explaining that his role is ÎµÏ€Î¹Î´Î¹Î±Î¹Ï„Î·Ï„Î¹ÎºÏŒÏ‚.
He expressed the optimism that it will pass the upcoming assessment, that might change in the future, and the equivalent (requested by the lenders), and this can be done after you have already changed the economic data. He said: “I Am optimistic that within January we will complete the evaluation and then we can demand and what we have, not only on the debt issue, but also elsewhere”. He even said that its priority is to boost the image abroad, and added: “THE EU and the ECB from the time that fulfills the country’s obligations, and fulfil them, must assume the obligations of, and she and our partners”.
Made reference to the issue of the debt, extension of debt, and the write-down of interest rates, noting “there needs to be the ECB to accept Greek bonds”.
Referring finally to the refugee spoke about the basic commitment made by Turkey, which does not comply with: “The basic commitment was to the illegal immigrants. Not only is the issue of repatriation and readmission,” he said, while demanding to change the Schengen agreement, because other data of 20012 and other today: “Those who make statements to the Schengen agreement, they don’t know what is the Schengen agreement and they are ignorant of the institutional acquis of the EU,” he concluded.