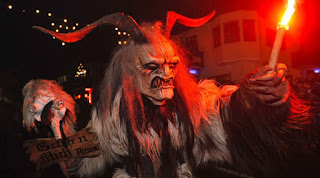 If you find yourself in Slovakia e.x can you throw food on the ceiling, in fact… but who would you like to happen in Greenland, because there the Christmas food is skin whale with fat! Also, if you ever find yourself in Portugal during christmas holidays is there a chance to have dinner with, dead. All of the above are weird Christmas traditions around the world. Grab one of your shortbreads, turn on the tree lights and read the most strange is released for the holiday that we all love.
Catalonia – Caganer, the separate images of the manger

A custom, unique and special situation in Catalonia is the famous caganers.Maybe enough to have it work in the Greek market, as it is nothing more than small idols in human form, who wears a traditional outfit, he always has pants pulled down and is standing in a position… defecation. It may sound and seem weird, but the Catalans tend to hide in the manger and whoever finds it is lucky enough, as it symbolizes good luck next year.
Austria â€“ The evil demon Krampus

If you thought that Christmas is only smiles, love and compassion, forget that you knew.We may not deal particularly with the situation of the family of St. Basil, however, in Austria, the twin brother of the equally famous with him. It’s called Krampus and it’s essentially the exact opposite of the sweet and beloved pops small and large, since it is a demon that watches the kids and punish what was bad last year, taking them with him into the dark and deep depths of the earth. However, Greece still has not passed!
Christmas morning with the dead in Portugal

The custom is called Consoda and is the way of the Portuguese to honor those who are gone from life. Specifically, on Christmas morning they set up a small celebration in every home and on the table they put extra crockery for the souls of the dead.
Instead of coin, almond in Sweden

We hide a coin in the vasilopita for good luck to whoever finds it. In Sweden they don’t make new year’s cake, but pudding and hide a whole almond, which not only brings luck, but marriage to anyone who finds this within the next year!
Delicious skin of a whale. In Greenland love it too

The called Mattak and is a traditional christmas dish in Greenland, which is made from raw skin of a whale with a bit of grease on it. Maybe reminds you a little of our own tripe.
In Slovakia fly the food in the ceiling

The custom in Slovakia requires the elder of the house to take a spoonful of the traditional dish of Loksa, which is made from bread, poppy seeds, milk, sugar or honey and water, and the fire on the ceiling. As much food stuck to the ceiling the better the crops in the year, says the custom.
The stirring brings good luck in Great Britain

The British love christmas pudding and it is known and not weird at all. Did you know, however, that an old tradition he wants all the members to participate in the shuffle? For accuracy, all members of the family must stir it once the mixture of the pudding, clockwise right, while at the same time make a wish, as when we turn off here in Greece, the candles of the cake.