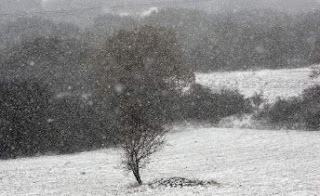 Rains, strong winds, snowfall even in the lowlands and a significant drop in temperature provides the National Weather Service…
the prognosis until new Year’s Eve.
Select the city that you want to see a weather app to see weather there in the next 4 days:
The analytical forecast of the national WEATHER service:
Tuesday 27-12-2016
Weather: Cloudy transiently increased with local showers or sleet from the midday hours to the north with a gradual extension to the rest of the country, while snow will fall in the mountains, and from noon to hilly areas in the central and north mainland.
Winds: From the north addresses 4 to 6 and in the southeast local 7 on the Beaufort scale with voltage support from the night.
Temperature: slight rise, mainly in terms of the maximum rates. Frost in places in the north, continental in the morning hours.
Wednesday 28-12-2016
Weather: Cloudy in places increased, mainly in the east and south where it will occur rain and isolated thunderstorms in the marine and coastal sections. Transient snowfall will occur in the continental mountainous and hilly areas and of the night, probably locally in lowland areas of central and northern italy.
Winds: From the north addresses 5 to 7 on the Beaufort scale and gradually from the north to the seas locally 8 Beaufort.
Temperature: In fall from the north. Frost in places on the mainland in the morning and evening hours.
Thursday 29-12-2016
Weather: Clouds with rain or sleet. Local snowfall in the mountainous and hilly areas and in lowland areas mostly in the central and north. Sporadic showers will occur in marine and coastal areas of the east and south of the country.
Winds: north to North northeast winds of 6 to 7 Beaufort and in the Aegean 8 on the Beaufort scale.
Temperature: In a significant drop. Frost locally strong to the continental.
Friday 30-12-2016 and Saturday 31-12-2016
Weather: to The west and north clouds transiently increased in patients snowfalls of short duration and gradual improvement. The rest of the country cloudy with local showers and sporadic storms on the sea and coastal areas as well as local snowfall in the continental europe. On Saturday, the phenomena will be limited to the south and mainly in Crete.
Winds: North northeast 5 to 6, and the Aegean sea, 7 to 8 Beaufort with weakening on Saturday.
Temperature: On the rise mainly in terms of the maximum rates. Frost locally strong in the northern continental.