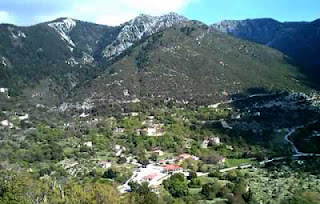 Seven and ten in the morning we found ourselves in the beautiful and historic Î ÏŒÏ€Î¿Î²Î¿, after the …Mt Paramythia. The temperature was minus 12 degrees. The cold piercing.
According to the statistical meteorological data, it is the lowest temperature in the prefecture of Thesprotia. As we were told by the very few inhabitants, down from five, while in the winter, because of the mountainous area, there was a frost, but this year the situation is unprecedented. But generally the whole of the prefecture of Thesprotia in the last few days the temperatures are unusually low. For example-Sunday 8 December in the morning in Igoumenitsa, the thermometer showing 2 degrees below Ï„Î¿Î¼Î·Î´Î­Î½, something that rarely, if any, is going on.
Source