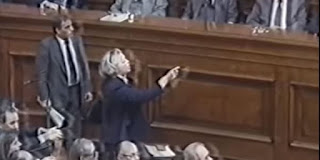 Can be left in history as a great actress but also had a remarkable progress as a member…. The reason for Anna Synodinou, who died today, Thursday, at 89 years of age. We all remember her as the great national Ï„ÏÎ±Î³Ï‰Î´ÏŒ – he had after all left her political career for 16 years. What is less known is the highly ÎµÏ€ÎµÎ¹ÏƒÎ¿Î´Î¹Î±ÎºÏŒÏ‚ and definitive way in which the Synodinou abandoned the policy.
Anna Synodinou began his political career in the years after the dictatorship. He was elected mp for A’ Athens with the New Democracy in the elections of 1974, 1977 , 1981, 1985, June 1989 and November 1989 . He served as secretary of state for Social Services (1977-1981) and municipal council of Athens in the 1987 to 1989 with a combination of “New Era” of Miltiadis Evert
Less well known is the sudden and definitive way in which he abandoned the policy which exists on live video.
It was in March of 1990 in the process of electing president of the Republic. It was the third in order of vote election for the President of the Republic, when the then mp of the Ecologist Alternative Marina Î”Î¯Î¶Î· opened a Ï€Î±Î½á½€, which read, “Reaches the theater for the +1, the President and the cloud”, while fans of mrs. Î”Î¯Î¶Î· seated in the public gallery began to sprinkle with cloves. The video clearly shows the incident â€“the banners, the cloves, the voices of Athanasios Tsaldari who yells.”To clear the gallery and arrested the troublemakers” while in the foreground it looks and Demeter Î›Î¹Î¬Î½Î·.
The reaction of Anna Synodinou surprise – got a hard-on, complains, doesn’t want to stop talking, the Tsaldaris asks her to leave the room (“Î‘Î½Î±ÎºÎ±Î»ÎµÎ¯ÏƒÏ„Îµ in the classroom mrs Synodinou”), and she’s mad from the anger leaves. After this incident resigned from both the termination of the function, as well as from the party and never returned to politics.
Source