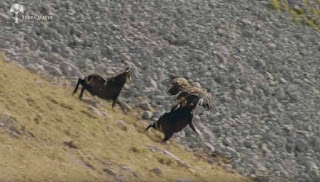 Is the moment when a golden eagle trying to catch a wild goat on a steep mountain…
The video is a production of the “Brothers of the Wind” shows the epic battle of the predator bird with the Î±Î¹Î³Î±ÏÎ³ÏŒ who tries running in the rugged mountain to be saved.
The golden eagle is lives at day raptor. I don’t have particular preferences for certain prey, and as a genuine “opportunists”, they attack in almost every small to mid-sized animal may encounter.
Almost 200 species of mammals and birds have been recorded as prey of the golden eagle, but the choice is determined, as is reasonable, to a large extent on the local availability and abundance of prey.