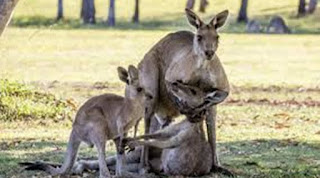 The Monday the photographer Evan Switzer made the day-to-day.. walk in an area close to the river Heads in Queensland, Australia. All of a sudden, the Switzer found himself in front of an incredibly emotional moment, as he later described it in the british newspaper Daily Mail, as she saw a large male kangaroo to keep protective in the arms of his partner dying.

Close to the two animals were small, and, according to the testimony of the photographer, the female was trying to touch for the last time, the little, before closing his eyes. The Switzer stated that he has seen and photographed many times a kangaroo, but this is the first time in his life that he observes a similar scene. He stressed that he was impressed by the male kangaroo who was very protective of the female and standing for hours next to the body to not to approach other animals.
The “moving” photo went viral, but soon the story has been negated by the statements of an Australian scientist. The veterinarian, dr. Derek went into lecturer in veterinary pathology at the university of Sydney, said that the picture has been interpreted wrong by the photographer.
The went into argued that, in his opinion, there is no doubt that the male kangaroo killed the female while trying to mate with him. The doctor went into stated that the male kangaroos during mating often become violent and injure fatally the females, in particular, when those do not correspond to the love call or try to escape.