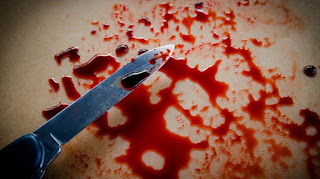 When the cops…
contacted, in mid-January of 1963, to come in Ano Liosia because in a trailer there were episodes, I imagined that we were confronted with a gruesome sight. When they arrived they saw two women lying dead in a pool of blood, while a young girl, badly injured, calling for help.
The three women had been attacked with a knife and the two of them they managed to save themselves from the fury of the assailant who beat her to death.
Perpetrator of the triple homicide, as it proved afterwards, was the owner of the caravan D. A. who worked as a repairman Î³ÎºÎ±Î¶Î¹Î­ÏÏ‰Î½. Beside himself, the man attacked and killed with a knife, the mother-in-law and sister-in-law, while seriously injured his wife.
THE D. A. he was arrested and speaking to the police officers denied that he was responsible for the carnage. Was justified, but that was in defense as the three women, as alleged, were attacked with sticks. It was preceded by a fight between the couple, as the D. A. asked his wife split up and she refused… The mother and the sister tried to help, but things got out of control and evil didn’t take long to happen.
In May 1963, D. A. he sat in the dock at the assize court accused of the double murder, and attempted murder to the detriment of his wife.
Witnesses, prosecution and defense testified before the court, their own truth, for the offender and his life with his wife. The men claimed that the defendant was abusive towards his wife, while I don’t, that he was “a god-fearing man and not a barbarian, as they wanted to present”.
“I am a man of God, my wife cheated on me”
When the time came of the plea, the D. A. made reason for a bad time and he claimed that, lately, he and his wife fought constantly. Their relationship, he said by way of apology, he was on edge as she was cheating on him.
“I am a man of God in contrast with my wife which immediately after our marriage he started cheating on me with my ex-fiancÃ©,” claimed the accused and argued that he could not tolerate this situation and decided to dissolve their marriage.
The fateful day he announced to his wife his decision and, as claimed by the defendant, at the time they were discussing the issue that the mccarty for mouthing off constantly. Finally, after many discussions, my wife made it clear that she was not prepared to give him a divorce. Things got heated in the debate intervened, as he said, the mother and the sister, which then, together with his wife, attacked him and started beating him with sticks. “I lost my temper and out of control now, I pulled from my pocket a knife and assaulted them,” she said addressing the court the defendant.
In the morning of 25 May, 1963, the jury having convicted the defendant D. A. for the triple crime, but they got the benefit of the boiling mental momentum.
THE D. A. he was convicted of the murder of the sister-in-law to a term of imprisonment of 20 years. For the murder of his mother-in-law, imposed a sentence of 14 years, while for the attempted murder of his wife imprisonment of 7 years. Finally, the court imposed a, during a merger, a sentence of 20 years.