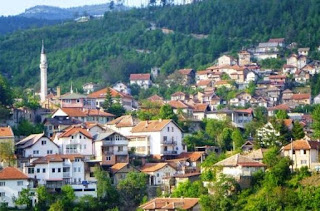 The “madness” spread in record time!…
A 45-year-old attempted to commit suicide, screaming that he couldn’t stand “the pain we caused the snakes that devoured the belly”! Another, jumped from the balcony of the second floor shouting “I’m a plane”, while a 12-year-old girl tried to strangle his grandmother!
A group of students looked at everyone with pride “the red flowers growing in the body” and at the same time their teacher begged the cops to “put back the heart into place”, because he had fallen on the floor!
A total of 5 people lost their lives in those days, dozens were taken to psychiatric clinics, while at least 120 people were given for years of anti-psychotics!
The diagnosis: poisoning by fungus!
The doctors who were called to deal with the situation, immediately made the diagnosis: poisoning by a hallucinogenic fungus , was in the flour of rye which was used for the preparation of bread.
The “cursed bread”, which unwittingly made him the baker of the village, was the culprit for the disaster that had hit the Pont-Saint-Esprit. And remained “guilty”, for 50 years.
The CIA is behind the mass delusion! Just last week an american journalist, o H P Albarelli Jr., presented a completely different version of the “cursed bread”! According to the research of the bread was indeed “poisoned” but not by a fungus, and certainly not “accidentally”!
Behind this strange story, hidden the CIA and a top secret experiment made in collaboration with the office of the u.s. army, SOD!
As for the scientists who made then the diagnosis of poisoning by a fungus, “working in the swiss pharmaceutical industry which was the sole supplier of LSD, the CIA and the U.S. military” supports the H P Albarelli Jr.
A strange suicide, led to the revelation!
The american journalist brought to light evidence that shows that by order of the CIA, the bread the local bakery had been added to the hallucinogenic drug LSD as part of an experiment for mind control, mind control, the height of the Cold War.
This theory is based on secret documents of the CIA, has managed to secure mr. Albarelli in his quest to investigate the strange suicide of Frank Olson, a biochemist who worked in the service of the U.s. Army, SOD. The scientist had fallen from the window of the 13th floor, two years after the case of the “cursed bread”.
The mind control was the point!
Investigating the case, the american journalist discovered a confidential memo between a CIA agent and an employee of the pharmaceutical industry, in which there was reference to “the secret of Pont-Saint-Esprit” and “the similarities of the symptoms of LSD that was administered by the fungus of rye”!
With this item in his hands, the reporter began looking for answers among the associates of the suicide victim. And 50 years later, he saw unfolding before his eyes the tangle of revelations. Two of the biochemists who worked with Frank Olson, had been revealed to their own people that this was an experiment of the CIA using LSD, which they put in the flour meant for the only bakery in the area, in south-eastern France.
From the evidence gathered so far indicates involvement of the French secret services in the “control experiment of the mind”. In fact , according to american press reports, the French diplomats have already asked the CIA to take a position on the revelations of mr. Albarelli.