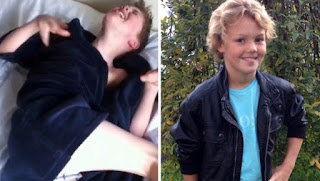 The common infection that changed his personality…
A mother from Ireland describes how the teenage son of “was hit by the devil”, which, according to her, it came after a common throat infection. This infection caused a rare neurological disease, known and called by many doctors as a “syndrome of the exorcist”.
Cameron Lindsay, who is now 14 years old, was a healthy young boy when he was struck by an infection that changed his personality. As reported by the parents, one of the characteristics of things that he’s doing now is grabbing knives and threatening. Recently he threatened to harm himself with a knife and had hallucinations that Adolf Hitler was at his window.
In February 2014, the teenager was diagnosed with an autoimmune neuropsychiatric disorder associated with streptococcal infection. Is caused, according to the british Sun, when the body tries to fight an infection but also, at the same time, destroys the cells of the brain.
Now, his mother has stopped working to be able to care for her child and to see what solutions there are to the problem. “I think that it is very difficult to find the words to convey what I feel when I’m watching it. In the beginning I was so worried that I was afraid to go to the doctor, because I thought that would lock him up in the center as a psychotic. The behavior can manifest as a mental illness, but this is caused by the same body”.
The teenager in and out of the last three years in hospitals to find a cure for his symptoms. The doctors removed the tonsils, as the bacteria are often fitted in there, and he was prescribed treatment with antibodies to prevent the seizures, but the symptoms remain and in fact intensify every time it gets sick.