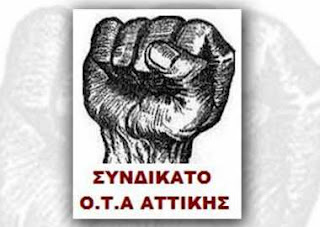 The SYNDICATE TAB, ATTICA, greece expresses its condolences to the family of the colleague… 5Î¼Î·Î½Î¯Ï„Î· from Megara, who left his last breath on Monday 18/1/2016. My colleague fought for life for three months. He paid with the life of the polar of the governments, the European Union and the majority of mayors.
This is the so-called development that we are preparing all those who have as their god the policy of the ÎµÏ…ÏÎ¿Î¼Î¿Î½ÏŒÎ´ÏÎ¿Î¼Î¿Ï…. To work for 5Î¼Î®Î½ÎµÏ‚ in, to be cheap and flexible of 495 euro and on the basis of the new proposal for insurance may not we can ever find the conditions to retire. This is our future they are preparing in order to reduce even more the so-called wage costs in order to preserve or even to increase the profitability of the large business groups.
The SYNDICATE TAB, ATTICA in time had opened up the issue of protective measures in workplaces. They have serious responsibilities that the Mayors who are implementing the anti-grassroots policy of every government in check of the large capital. The workers in the 5 months they felt in their own skin this time, what it means to be a worker without any job right.
Gentlemen 5Î¼Î·Î½Î¯Ï„ÎµÏ‚ the race that was given the previous time should not stop here. On the contrary, we should be motivated even more, we owe it to our colleague from Megara, we owe it to ourselves and for our children. We invite colleagues to join their voice through the committees of unemployed grassroots committees etc.e.
We have before us the twists in the social security system and will not have to go through the anti-labour – Î±Î½Ï„Î¹Î±ÏƒÏ†Î±Î»Î¹ÏƒÏ„Î¹ÎºÎ­Ï‚ twists that prepares and the current power-sharing SYRIZA ANEL. Should all employees regardless of employment relationship, to raise a voice, to show up. Not to go missed time to make a wall in front of the new looting that is being prepared. The social security system is not a commodity to is cost.
The SYNDICATE TAB, ATTICA calls on each colleague and each co-worker, to turn the grief, wrath and indignation they feel in an Organized struggle against the real cause, which gives rise, not only accidents, but also all the suffering that we live in. We call on the workers to take the case of the strike on social security in their hands. To participate en masse at the rally Saturday 23 January on park avenue at 11 in the morning and in the strike of 4 February.