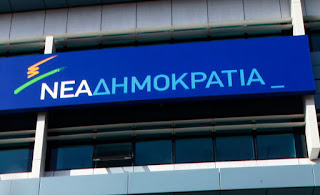 The New Republic does not deny the objectives…
the 3rd Economic Adjustment Programme, but the means chosen by the power-sharing SYRIZA/ANEL for their achievement, supports the Sygrou Avenue at an informal briefing.
As mentioned, the official opposition considers that in order to escape the country from the vicious circle of recession and deficits, and to emerge definitively from the crisis, it is imperative that the change in the mix of fiscal adjustment, with a reduction of taxes and contributions and greater retention of expenditure.
The Î£Ï…Î³Î³ÏÎ¿Ï… says that the insurance for example, increase the contributions as provided for in “plan ÎšÎ±Ï„ÏÎ¿ÏÎ³ÎºÎ±Î»Î¿Ï…” will lead to an increase of unemployment and undeclared work on the rise of tax evasion due to the connection contributions-income and extermination of those who receive remuneration in excess of 1,500 euros per month.
As noted, the New Republic does not consent to the wrong. It argues the need to create economies of scale through mergers of funds, harmonization of the contributions-benefits and, with regard to the resources of the insurance system, the rapid return to economic growth to reduce unemployment and to grow in a sustainable, self-powered manner, the social insurance contributions.
As indicated, in accordance with international best practices (best practices), as these have emerged in studies of the OECD and the EU, the fiscal adjustment relies more on expenditure restraint and less on revenue growth – it has more permanent characteristics, and contributes the most to the long-term sustainability of public finances.
In the SOUTHWEST, the “optimal” mix of fiscal adjustment, in accordance with the studies of the OECD and the EU, must be based by 2/3 on expenditure restraint in the 1/3 increase revenue. Thus, for an adjustment of eur 100, at least 66 would have to come from the expenditure side (reduction in wage and non-wage costs, transfer payments, grants, other operating costs) and the rest from the revenue side (increase in taxes, levies).
As noted, in Greece-the first Economic Adjustment Programme (2010-2012), was based too much on revenue growth, through the growth of existing and introduction of new taxes and less on expenditure restraint. On the contrary, the Second Economic Adjustment Programme (2012-2014), was mainly based on expenditure restraint. The change in the mix of fiscal adjustment contributed significantly to the restoration of confidence, the elimination of the “twin deficits” in the General Government balance and the current account balance, and allowed the comeback from the deep recession of 8.9% in 2011, growth of 0.8% in 2014.
The power-sharing SYRIZA-independent greeks, he concludes, ignores these lessons, and by obsessing and micromanaging obsession designed a 3rd Program of Economic Adjustment is based almost exclusively on an increase in taxes and contributions. 76% of the measures of the 3rd Programme regarding the increase of taxes and contributions, while the remainder relates mainly to cut pensions and social allowances
Source