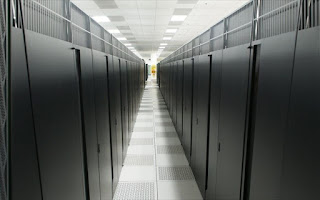 Apart from the peaks Î±Ï€ÏŒÎ¼ÎµÏÏ‰Î½ mountains, and the telescopes that are installed in these, increasingly in the last few years, the “hunting” dark energy “passes” and from cold rooms which hosts some of the most modern supercomputers.
The reason is that in such powerful machines give the possibility to the scientists to check their theories about the nature of dark energy, “running” mathematical models that simulate the evolution of the universe, if applicable these theories. Thus, by comparing the result of these virtual experiments with the real picture of the “world”, you can see whether they base their assumptions.
“As it is unknown the nature of dark energy, when we analyze observational data about the universe, we don’t know what is the model of interpretation”, says the online edition of the american magazine Cosmos the ÎšÎ¬Ï„ÏÎ¹Î½ Î§Î¬Î¹Ï„Î¼Î±Î½, a physicist from National Laboratory Argonne in the USA.
“In a simulation, however, in a supercomputer, do we know what model is this based, therefore we are able to correlate with real measurements”, completes.
Cosmologists know with certainty that the birth of the Universe placed before 13.8 billion years, from a “cosmic seed” of enormous density began to expand. Astronomical observations have also shown that about 9 billion years later, the expansion began to grow at an accelerated rate.
The acceleration is attributed by scientists in the dark energy, which acts against the gravity. However, it remains still a mystery whether behind this term lies a constant density of energy that overwhelms Î¿Î¼Î¿Î³ÎµÎ½ÏŽÏ‚ space, as proposed by Einstein 100 years ago, or some other natural phenomenon.
Together with her colleagues, the Î§Î¬Î¹Ï„Î¼Î±Î½ has created a cosmological model of computation for the structure and evolution of the universe. This model can be “run” on machines with hundreds of thousands of processors, in order to carry out trillions of calculations every second.
The workshop group has recently completed a simulation of the first 13 billion years of “history” of the universe. The results of the simulation will be made available to all cosmologists that do not have access to a supercomputer.
Also, will be used to create tools for the analysis of data that will emerge from the telescope, LSST (Large Synoptic Survey Telescope), which will start operating in Chile by 2022. For 10 years, the LSST will map a billion stars and galaxies, thus ensuring that the scientists evidence for the function of dark energy.
The supercomputers are extremely valuable for the study of dark energy, because this “exotic” form of energy acts on galactic scales. Unlike dark matter, which is also unknown, could possibly be created in particle accelerators.