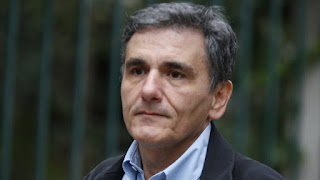 For a different agenda for the future the minister of…
Finance immediately after the completion of the meeting of the ESM. As he noted â€œmany things have changed. Has completed the recapitalisation of banks, has completed the first assessment and we have
an agreement for the debt. The development must be completely different from the one we had before 2008,â€
“Just finished today the meeting of the ESÎœ of governors and has basically finished the first evaluation of the programme. Tomorrow will be the directors who will simply ratify that decision. There is no subject that remains”, stresses the minister of Finance Euclid Î¤ÏƒÎ±ÎºÎ±Î»ÏŽÏ„Î¿Ï‚ in an exclusive statement to the Athens-Macedonian Agency and adds:
“In my previous meeting with Pierre Moscovici explained that they have changed a lot since last year, has completed the recapitalization of banks, has completed the first assessment and we have a deal for the debt. I understand that for many Greeks still things are very tough, we had a very, very tough measures and I feel the need to say that the next time you need to be not only the time we emerge from the crisis with development, but we place emphasis on the quality components of this development. The issues of justice, issues of labour relations, issues of ecologically, because growth should be a completely different development than the one we had before 2008 that brought us to the crisis and must be a development that is based on a completely different model. And this model for a government of the Left can only be one that respects their employees and that ensures that when we come to the development of the well will be shared to many, and a development that respects the environment.
This, again, and with Pierre Moscovici that we look forward to a collaboration as we had but with a different agenda for the future”.