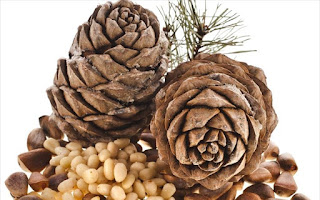 The properties of the seeds of the pinecone or otherwise Ï€Î¹Î½ÏŒÎ»Î¹Î±, came under the microscope of researchers, as they have the power to reduce us in the mood for food by helping us in the weight loss.
American scientists have provided women oil produced from the seeds of koukounaries pine and found that 30 minutes after administration increased the levels of two specific hormones, which reduce the mood for food.
According to researchers, the hormones increase in the blood due to the seeds, was the Ï‡Î¿Î»ÎµÎºÏ…ÏƒÏ„Î¿ÎºÎ¹Î½Î¯Î½Î· (CCK, increase by 60%) and GLP1 (glucagon-like peptide, increased by 25%). Their job is to send messages of satiety to the brain and, consequently, to decrease the consumption of food.
As pointed out by the scientists, the seeds of pine contain polyunsaturated fatty acids which suppresses appetite. Proof that in 18 of the obese women who took part in the study it was found that the seeds were causing a sensation a reduction in the appetite, at least by 29% and the reduction of food intake was of the order of 36%.
The increase of hormones that reduce the disposal of food lasted 4 hours and the highest point of their growth was at 30 minutes after taking the oil.
The interesting thing from the study is that the suppression of appetite was in a natural way, without medications, however, the scientists stressed that you don’t have to stick in consuming them as these seeds are rich in calories. While they also noted that there are various kinds of such seeds of pine trees, as is the fierce, the tame, black, Korean etc. and has not been tested if they all produce the same beneficial results. It is very likely that this happens, but you need to be more studies to determine, as they said.
In closing, it is worth noting that the seeds of the pine cone was known for their beneficial properties in the diet of both the ancient Greeks and the Romans.