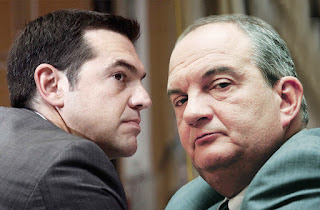 The phone call between Kostas Karamanlis and Alexis Tsipras just before the 17-hour negotiation of the prime minister with the…
partners on July 12, was in the spotlight in the last week.
The “Ethnos of Sunday”, after communicating with sources from the the Maximos Mansion, today presents the unknown dialogue between the two men.
According to the story of the newspaper, two days before the meeting, called mr. Tsipras Kostas Karamanlis, who turned in a highly dramatic tones: “The country is hanging by a thread. Keep in mind Greece”.
“The decisions I have to make. Anyway it’s always in my mind, the Greeks, and especially the most weak â€“ I give and I will continue to give the fighting for them,” was the reply of the prime minister.
In fact, the prime minister insisted, wanting to show that he is determined to prevent the movements of each risk and threat against the citizens and the Greek economy: “This is what I do. The battles I fight are from the first day I took over the governance of the country. And I’m trying to get the snake out of the hole”.
The information of the newspaper report in the hot these days after the referendum was not only the Karamanlis called on Alexis Tsipras and former prime minister George Papandreou, as well as other top political executives, such as Dora Bakoyannis.
Source