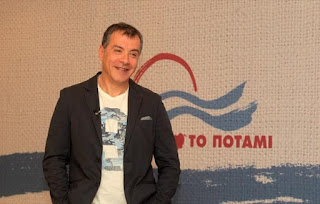 The three-day 26, 27 and 28 February…
will take place the conference of the River, at the Exhibition Center of Peristeri, in accordance with the notice of the party.
At the conference, with the right to vote and stand for election, participate activists of the movement from all over Greece, members and meps, candidates, members of the last two elections. A prerequisite is to have completed their registration until 14 February. Even, participants can be members of the Committees for Dialogue and Youth, as well as participants in the Policy Areas, also with the condition that they have completed their registration until 14 February.
The River gives the opportunity to friends and supporters to enroll as members and to participate with full rights at the conference by 14 February. These records are subject to the approval of the Central Organizing Committee of the Conference (ÎšÎŸÎ•Î£). All participants will have to pay as financial assistance in the amount of 10 euro.
As has been established, the auditors will be elected the Head of the River, the Commission for the Evaluation and Exploitation Executives (EAAS) and the Meeting of Representatives (ÎœÎ•Î£Î¥Î‘), as it is called in party jargon of the River, the Central Commission or the National Council for other parties.
From there it is proposed to be elected the Secretary of the Organisational, Parliamentary Work, the Political Council, the Ethics Committee and the Committee on Economic Management.
The details for the election of persons and the institutions will be made public Monday, 15 February, with the publication of the proposal for a new Statute and Regulation of election of bodies and representatives. Statute and Regulation will be subject to the approval of the members of the conference on the first day of launch.
Source